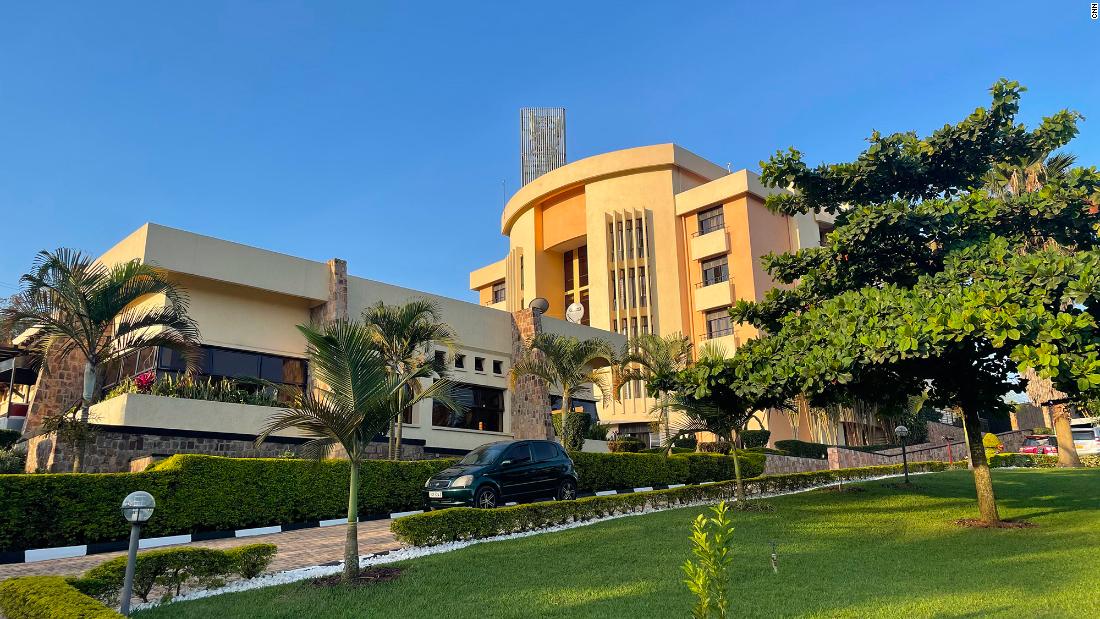 The Rwandan government told CNN that the migrants will receive full board, health care and support for five years or until they are self-sufficient. It’s a controversial plan that the UK has touted as an innovative approach to safe and legal asylum that will disrupt the dangerous trade of people smugglers. But it has been condemned by dozens of refugee rights groups, international organizations, British leaders, the head of the Anglican Church and even Rwandan opposition politicians.

A week before the first arrivals were due, workers were putting the finishing touches on a small wooden shed next to the hostel’s restaurant. “This will be a store so that they can buy everything they need here instead of going out,” explains the director, Ismael Bakina. Two covered areas in the gardens will serve as smoking areas and a tent further away will also serve as an interview and play area.

There is an airport-style security checkpoint in front of reception, including a baggage scanner and guards with metal detectors. They are polite, professional and thorough. “As you can see, we are ready for the migrants even today,” Bakina said, speaking to CNN, hours before the first round of legal proceedings against the deportation was launched in the UK last week. The lawsuits against the policy have so far been unsuccessful and the UK’s first flight to Rwanda is due to depart on Tuesday.

When they arrive, two migrants will share each room, with communal bathrooms and washrooms on each floor. They will also have two red-carpet prayer rooms overlooking the Kigali hills, free WiFi, and computers to keep track of their lawsuits. The Rwandan authorities point to the relative privilege that the migrants will have here compared to the facilities in British detention centres.

“We want them to get safe, dignified accommodation, and there is also a package they will receive so they can gain skills to get an education and maybe start a business,” said Yolande Makolo, spokeswoman for the Rwandan government to CNN.

The UK says it will pay Rwanda £120 million ($145 million) over the next five years to fund the program. In addition, the UK has also pledged to pay the processing and integration costs for each person relocated, including the costs of legal advice, staff, translators, housing, food and healthcare. According to a parliamentary inquiry briefing, the UK government said it expects these to be comparable to asylum processing costs in the UK, which are around £12,000 per person.

The UK has refused to disclose the cost of the flights it will charter to transport deportees to Rwanda. The Home Office said in its latest annual report it paid £8.6million to charter 47 deportation flights carrying 883 people in 2020. While the cost of individual flights varied depending on destination, the figures mean the Home Office averages £183,000. spent per flight or £9,700 per person.

Because there is no limit to the number of migrants, thousands could potentially flow into Kigali in the first five years of the plan.

the supposed The security that Rwanda provides has been questioned by international human rights organizations such as Human Rights Watch (HRW), who argue that the country “cannot be considered a safe third country to send asylum seekers”.

HRW has been monitoring and investigating the human rights situation in Rwanda for decades and has documented violations ranging from “repression of freedom of expression, arbitrary detention, ill-treatment and torture by the Rwandan authorities”.

The organization accused Rwandan authorities of killing at least 12 refugees and arresting more than 60 in 2018 after police opened fire on a group of protesters protesting cuts to food rations. The Rwandan National Commission on Human Rights investigated the incident, claiming that police “had to resort to violence after all peaceful people have failed”, but called the tragedy an isolated event.

The UK’s plan has also been criticized by the only opposition party that has defeated Rwandan President Paul Kagame in the last election, the Democratic Green Party of Rwanda, who says the country cannot afford it. Rwanda is the most populous country in Africa. Do you think it will be easy for Rwanda to help these people?’ Jean Claude Ntezimana, the secretary general, told CNN.

Rwanda is almost a tenth the size of the UK but has nearly 13 million people, almost a fifth of the UK population.

The Green Party accuses the UK of violating its international obligations by shipping its unwanted migrants 4,000 miles to Rwanda. “If it is not the choice of the refugees, it is inhumane and illegal,” Ntezimana said.

The Rwandan government insists it is perfectly legal.

“There are no laws being broken with this partnership,” Makolo told CNN. “There is nothing in the Refugee Convention that prevents asylum seekers from being relocated to another safe country.”

Makolo admits that a similar program with Israel did not work and that Rwanda gave up “very quickly”. But, she says, the UK migrant deal is completely different and will succeed. In fact, she said, Rwanda could soon also accept migrants from Denmark as negotiations are nearing completion.

Most recently, Rwanda partnered with the UN Refugee Agency to host vulnerable asylum seekers who had been evacuated from Libya. In the three years that the program has been in operation, just over 1,000 migrants have passed through the Gashora Emergency Transit Center. Migrants stay on average between four and eight months before being resettled abroad, the center’s manager said. The migrants have three choices: resettlement elsewhere, voluntary repatriation to their home country or local integration into Rwandan society. No one chose the latter two, said Fares Ruyumbu, the camp manager.

“You can’t compare it (Libya and Rwanda),” said Zemen Fesaha, 26, an Eritrean refugee in the Gashora transit center. He spent four years in what he described as appalling conditions in Libya, trying repeatedly but unsuccessfully to cross the Mediterranean to reach Europe. “It’s like going from hell to heaven.”

Although the 11 months he spent in the camp in Rwanda were safer and easier, he is determined to leave.

And Zemen is not alone in this. None of the refugees at the emergency center that CNN spoke to wanted to stay in Rwanda.

Nyalada Gatluak Jany, 26, from South Sudan, dreams of moving to Finland with her one and a half year old son. “What I want isn’t here, it’s there,” she said.