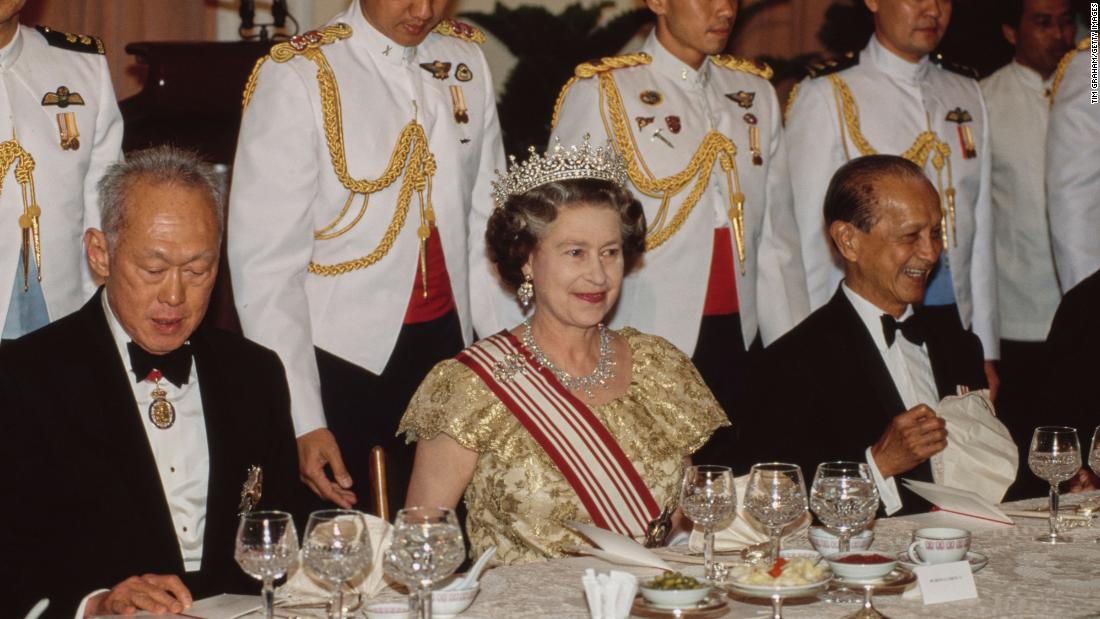 The main tribute was Singapore Prime Minister Lee Hsien Loong, who expressed his condolences to British leaders and shared a photo taken with the Queen in 2018. “Her Majesty was the heart and soul of the United Kingdom,” Lee wrote in an accompanying message. shared on Facebook. “Her Majesty has also left an important mark on the history of Singapore and our longstanding close relationship with the United Kingdom.”

“Her passing is deeply mourned by everyone in Singapore,” he added.

Lee’s ministers and other senior members of his ruling party cabinet, including political successor Lawrence Wongquickly followed suit – paying tribute to the late Queen by sharing letters of condolence and recounting past encounters with her during official visits at home and abroad.
Singapore’s response to the The Queen’s death this month at the age of 96 fits into the wave of grief expressed online and in many countries around the world, but is at odds with some other former colonies where the response has been more complex.
In India, where many view the monarchy as a symbol of colonial-era oppression, some have called for the return of the Koh-i-Noor diamond; in parts of Africa many refuse to mourn; while some Caribbean countries have suggested they will consider removing the Queen’s son – now King Charles III – as head of state within the next few years.

Experts say the reason for the difference is that Singapore — ruled by Britain for 144 years until 1963 when it became part of Malaysia and then fully independent in 1965 — emerged from colonial rule relatively unscathed compared to some of the other former colonies.

The politicians have even given Britain measured credit over the years for establishing a justice system that has contributed to the modern prosperity of the city-state, now a thriving sovereign country and one of the richest in the world per capita. has its own head of state.

Parliament observed a minute’s silence on Monday out of respect for the late Queen. “Her Majesty was not only Queen of the United Kingdom, but also the head of the Commonwealth, a family of 56 countries around the world of which Singapore is a proud member,” said House Leader Indranee Rajah.

“In addition to the formalities and ceremonies associated with state visits, the Queen took the time and effort to get to know ordinary Singaporeans better,” she said.

And on September 19, the day of her funeral, state flags will be flown at half-mast at government buildings – at the behest of Prime Minister Lee.

In Singapore, roads, neighborhoods and prestigious institutions such as government offices and hospitals still bear the names of British lords and various military commanders.

Queenstown, a bustling central district, the Queen Elizabeth promenade Walk and even Princess Elizabeth Primary School are named after Elizabeth II in commemoration of her coronation in 1953.

In 2019, Singapore held large-scale bicentennial celebrations with festivals and events to mark the 200th anniversary of the arrival of British statesman Sir Stamford Raffles and the British East India Company.

“Singaporeans, especially from the ruling elite, tend to have a rather benign view of Britain and its monarchy,” noted political scientist Ian Chong of the National University of Singapore, recalling the public interest surrounding visits of royals over the years.

A 2012 visit by Prince William and his wife Catherine as part of their Diamond Jubilee tour of Southeast Asia and the South Pacific drew large crowds across the island.

The Queen herself was a guest three times: in 1972, 1989 and 2006. As part of Singapore’s diplomatic charm offensive, she named a cultivated orchid hybrid after her – grown from orchids native to Singapore and Papua New Guinea.

“In general, the views of Queen Elizabeth II and the British Royal Family are positive in Singapore,” Chong said.

“Some of this isn’t surprising, given that our exit from British colonial rule was a negotiation, unlike states that saw widespread repression and more violent endings of colonial rule.”

But there were also dark sides to British rule in Singapore. Experts point out that the colonial administration suppressed local identity and made English the official language. They also say that modern Singapore’s notoriously tough stance on hard drugs was the result of colonial Britain’s lucrative opium trade.

“The official story deliberately romanticizes (colonialism) for political reasons, while suppressing other perspectives,” said exiled journalist and historian Thum Ping Tjin, also a fellow at Hertford College, Oxford. Like other critics, Thum has questioned the admiration Singapore’s leaders have sometimes expressed for their colonial founders and the erasing of anti-colonial activism.

The empire’s complex legacy was evident in several controversial colonial-era laws that remained in effect in Singapore even after independence. The Temporary Penal Provisions Act allowed people to be detained without trial and Section 377A criminalized homosexuality until recently it was announced it would be repealed after decades of opposition.

“In many ways, independent Singapore is an heir to the British colonial rules that we have adapted – we see this in everything from government housing plans, policies and specific laws,” said Chong the political scientist.

“Our politicians often point to the colonial system of laws and courts as an asset to our prosperity and stability. So colonial rule is generally seen as benign and a bedrock of Singapore’s wealth. Hence the festive atmosphere around (events like) the bicentennial celebrations in 2019.”

After his mother’s death, Charles ascended to the throne to become the new king, making him the head of state for 14 countries (besides the UK).
But some of those countries — including Antigua and Barbuda, Jamaica and Belize — are openly considering severing ties with the British monarchy, and some have suggested the Queen’s death could be a catalyst for this move.

In November, Barbados, Britain’s oldest colony, deposed the queen as head of state and declared itself a republic.

But in Singapore, a republic that appoints a president – currently Halimah Yacob – as its own ceremonial head of state, Charles seems relatively popular.

When he was a prince, Charles was a well-known public figure to many Singaporeans. In 2017, he received the same Singaporean honor as the Queen and other dignitaries for having an orchid — the national flower — named after him and his wife Camilla, now the Queen Consort.

“A gift fit for a (future) king and perhaps a well-deserved present after a grueling and packed program,” state media wrote.

Memes of Charles among younger Singaporeans have already surfaced on popular local discussion boards, suggesting that the royal family’s legacy remains intact, at least for now.