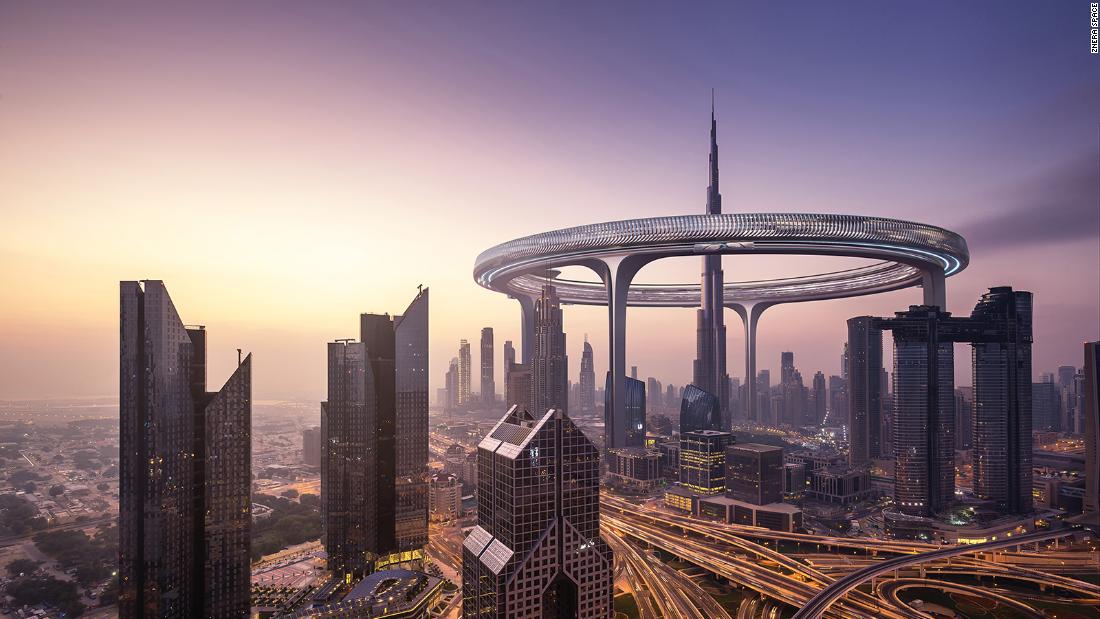 In Dubai, experimental architecture firm ZNera Space has proposed a conceptual design featuring a massive five-storey circular structure wrapped around the world’s tallest skyscraper, the Burj Khalifa – which is a whopping 829.8 meters high, almost double the height of the Empire State Building.

Known as Downtown Circle, the concept connects community, luxury and futuristic urban planning in a hugely ambitious design, brought to life through a series of mesmerizing illustrations created in collaboration with Pictown, a firm specializing in architectural renderings.

As compelling and radical a design as the Downtown Circle may be, it is – for now – practically and financially implausible, admit Chowdry and Remess.

“We worked on very important aspects that sparked the discussion about how we plan cities,” Remess added. “The reason we chose the Burj Khalifa was because it is located in a very dense urban area, and we want to address the issues associated with dense urban population.”

The structure, intended to perch 550 meters (1,804 feet) above street level, would have a circumference of more than three kilometers (1.8 miles). The ring would be supported by five massive pillars – with their bases on empty lots – which could potentially serve an additional purpose.

“We wanted to create a microclimate in Downtown and create some sort of envelope around the area to regulate the temperature and make it more livable in hot weather,” Chowdry says. “You can use that vertical [pillars] as urban air purifiers.”

The structure of the pillars could feature an innovative smog filter design created by ZNera Space, which was shortlisted for the World Architecture Festival 2018 award in the ‘Experimental Future Project’ category.

Sustainable design for the future

In Dubai, temperatures often exceed 40 degrees Celsius (104 degrees Fahrenheit), and the architects want their design to set a new benchmark for sustainability in the region.

“The entire ceiling will be a piece of solar panels,” Chowdry said. “What we also want to do is implement a technology that we’ve already used in a previous project, solar hydrogen cells.”

This technology uses solar energy to convert water into hydrogen, which can then power the air conditioning and power the building.

Part of the design concept includes an electric tram system suspended around the underside of the structure. Credit: ZNera room

The design has been drawn up to align with Dubai’s optimistic master plan for a sustainable urban environment by 2040.

The concept also provides transportation options from one end to the other, including an electric tram system capable of speeds of 100 kilometers (62 miles) per hour and infrastructure for air taxis.

This amount of architectural ambition does not come without the technical challenges, such as creating a structure strong enough to house the interior elements, yet light enough to be supported by the pillars.

“The structure itself is quite lightweight. I imagine it as (a big) airplane — the skin, the ribs, that becomes the structure and inside it’s all hollow,” Chowdry said.

“But then it’s supported by these columns and the circle ring,” he continued. “We chose to make it circular because it is the most stable structural format.”

ZNera Space’s principal architects, Najmus Chowdry and Nils Remes, hope their concept will get people talking about better ways to build in urban areas for a healthy and sustainable future. Credit: ZNera room

The highlight of the interior design is a continuous green belt called the Skypark, which connects all five floors of the structure.

“The Skypark is the central backbone of the entire design,” explains Chowdry. “It will be a mixed-use green space and it will also serve as a space to rethink how agriculture will happen in the future, especially in cities.”

“If you look historically, agriculture came first and then we built the city,” Remess said. “Now we have lost this concept a bit. With this green belt in the structure, we want to bring agriculture and food production back to the city center.”

The concept certainly attracts attention, but not everything is positive. Since posting the mock-ups to the company’s Instagram page, some commentators have said the design could destroy the fabric of the downtown area.

“Some comments online have been negative, but – as someone said to us recently – which looks better: an empty finger or a finger with the ring on it?” said Chowdry. “I think it just adds to the verticality of Burj Khalifa.”