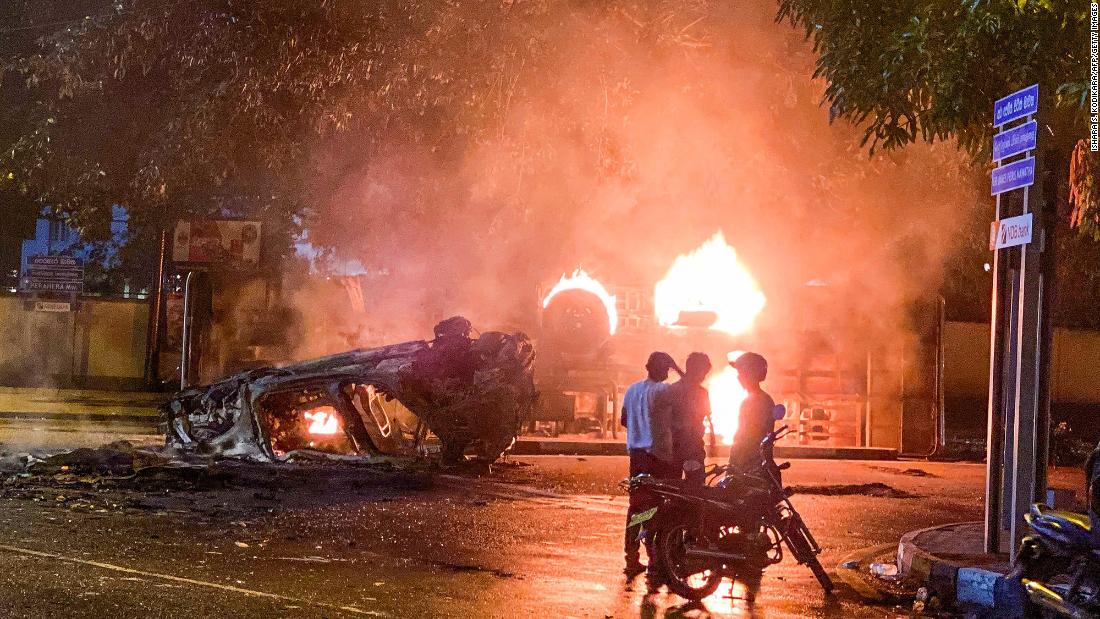 The army was called to the prime minister’s “Temple Trees” complex after protesters tried to break into his private residence twice overnight, a senior security source told CNN.

The attackers managed to enter “the outer edge” of the residence where they dropped petrol bombs, but their attempts to enter the building were thwarted when the army fired tear gas, according to the source.

A police officer involved in the clashes died at the scene when a tear gas gun exploded, the security official said, confirming that Prime Minister Rajapaksa and his family have since been taken to an undisclosed location.

The scenes followed a night of violent clashes in the Sri Lankan capital Colombo on Monday, in which at least seven people died, police said, although it is unclear whether all the deaths were directly related to the protests.

About 217 people were also injured as a result of the clashes, according to local health authorities.

Prime Minister Mahinda Rajapaksa resigned Monday evening shortly after a nationwide curfew was imposed. The curfew came after live television showed government supporters, armed with sticks, beating protesters in several locations in the capital, including Galle Face Green park, tearing down and setting fire to their tents. According to witnesses who spoke to CNN, dozens of homes across the country were set on fire amid the violence.

The park has become a focal point for protesters who have been demonstrating for weeks against the government’s alleged mishandling of an economic crisis that has sent the prices of everyday goods soaring and caused widespread electricity shortages.

Armed troops were deployed, according to the CNN team, while video footage showed police firing tear gas and water cannons to disperse the protesters.

“We are now helpless, we are begging for help,” Pasindu Senanayaka, an anti-government protester, told Reuters as black smoke billowed from a burning tent nearby and parts of the protest camp lay in disarray.

Police have also accused the protesters of violence, saying they attacked buses taking local officials to Colombo to meet with the prime minister.

Following the chaotic scenes, the government imposed a curfew across the island, and the 76-year-old prime minister resigned shortly after. “Multiple stakeholders have indicated that the best solution to the current crisis is the formation of an interim government for all parties,” he said.

“That is why I have resigned so that the next steps can be taken in accordance with the Constitution.”

However, it remains unclear whether the curfew and his resignation will be enough to contain the increasingly unstable situation in the country of 22 million people.

Many protesters say their ultimate goal is to force President Gotabaya Rajapaksa, the prime minister’s brother, to resign, something he has so far shown no sign of doing.

“(I) strongly condemn the violent actions taking place by those who instigate and participate, regardless of political allegiance,” he wrote. “Violence will not solve current problems.”

On Tuesday, Human Rights Watch said the use of force by government supporters had led to “a dangerous escalation, increasing the risk of further deadly violence and other abuse.”

“It is vital that the security forces fully respect the right to peaceful assembly and that those responsible for violence are held accountable,” Ganguly said.

For weeks, Sri Lanka has been battling its worst economic crisis since the island’s independence in 1948, causing shortages of food, fuel, gas and medicines and skyrocketing the cost of basic commodities.

Stores across the country have been forced to close because they can’t run refrigerators, air conditioners or fans, and soldiers have been stationed at gas stations to calm customers who have to queue for hours in the blazing heat to fill their tanks. . Some people have already died waiting.

Last Friday, President Rajapaksa declared a state of emergency after clashes near the country’s parliament, but public anger continues to escalate.

President Rajapaksa is the only surviving family member still in power.