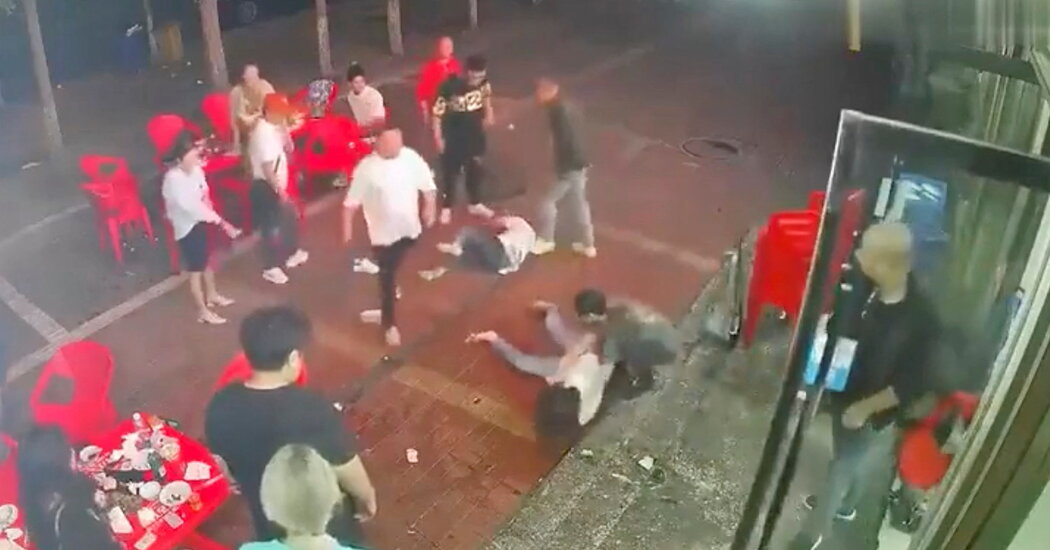 BEIJING — The man walked into a barbecue restaurant in northern China and approached a table with three women. He put his hand on the back of one, who shook it off. In response, he beat her—and then, along with several other men, brutally beat her and the other women, hitting them with chairs, kicking them, and dragging them outside.

Security camera footage of the brutal attack, which took place in the city of Tangshan on Friday and left two women hospitalized, quickly spread online and dominated public conversation in recent days. Women have flooded social media with their outrage and terror at the threat of sexual violence looming in everyday life. Just three of the many related hashtags on the Twitter-like platform Weibo have been viewed more than 4.8 billion times.

The intensity of the public response highlighted the growing focus on sexual harassment and gender-based violence in China, where conversations about equality are increasingly common. But almost at the same time, other stories emerged that narrowed the gender angle. Some lawyers said the incident was about public safety, not just for women. State media focused on the possibility of gang violence. Weibo has deleted hundreds of accounts and accused their users of fomenting gender enmity.

The conflicting interpretations underlined how divisive feminism remains, both for the general public and for a government that sees independent activism as a potential challenge to its control.

Feminist activists have been fired, charged or arrested in court. State media have described the #MeToo movement as a weapon for foreign forces to weaken China. Protection against domestic violence and sexual harassment is inadequate.

In January, Chinese social media broke out similarly after a woman was found chained in a hut in eastern Jiangsu province, and authorities later acknowledged she was a victim of human trafficking. But officials also arrested or censored some who pushed for more information. Last year, tennis player Peng Shuai disappeared from view after she accused a high-ranking former Chinese leader of coercing her into sex.

The attack in Tangshan caused so much outrage, in part because the violence was so extreme. But that anger won’t necessarily translate into increased public recognition of the risks women face, said Feng Yuan, the head of Equality, a feminist advocacy group in Beijing.

“The main reason he hit her was that his bullying didn’t produce the desired result. But many mainstream commentators didn’t see that,” Ms Feng said. “The role of gender is being erased – this is what we have to fight against.”

Footage from the attack in Tangshan, a city of 7.5 million people about 100 miles east of Beijing, shows a man walking into the restaurant, where several tables of diners are still standing, shortly before 3 a.m. . As he approaches the women’s table and places his hand on someone’s back, you can hear them ask what he is doing, and push him aside – and do that a second time, after he tries to touch her again. He hits her.

Her friends try to intervene, but several men rush in from the outside and start beating them, pushing them to the floor, throwing chairs and dragging one out by her hair, where they kick her as she hits the floor. is.

An onlooker called the police almost immediately, according to an interview she gave to a state media outlet. Friday around 6pm – 15 hours later, after the video had already spread widely – local police released a statement saying they would “do everything” to arrest the suspects, prompting some observers to dissuade them. to accuse of responding only because of the public outcry. On Sunday, authorities said they had arrested seven men and two women. The suspects, who are in custody, could not be reached for comment.

Social media exploded with comments from users decrying both the attackers and the wider sexist attitudes they said enabled them. They were furious that authorities were able to immediately track down suspected coronavirus patients, but seemed unwilling to deploy similar resources to protect women. Many noted that the women had followed all the usual tips to avoid harassment — they’d gone outside in a group and were in a well-lit public area — and were still unsafe.

“What precautions does this world want me to take so that they are enough?” wrote the author of a widely shared article on WeChat.

A state media outlet, The Paper, examined legal records of similar cases of men assaulting women after they were rejected. It found several cases where men were sentenced to one or two weeks in detention. In some cases, the men spent less time in detention than the women in hospital.

But while many delved into the role of gender in the attack, other voices dismissed its importance. Some social media users asked why the women were out so late. The state-owned Beijing Youth Daily said in an early report that the man had “chatted” with the women, then “both started pushing and pushing”.

Editors in other state media called for improvements in public safety but failed to mention the specific dangers women face. Many centered on speculation that the attackers were gang members — a perception that gained traction as many residents of Tangshan began sharing their own stories of being harassed by criminal groups. On Sunday, officials announced a two-week campaign against organized crime.

Others were more explicit in denying the role of gender. “The perpetrators in similar cases have not specifically targeted women, but all weak people (including men),” Lu Dewen, a sociology professor at Wuhan University, wrote in a blog post.

Huang Simin, a mainland-based law attorney who has worked on cases related to gender violence, said it’s important to consider other factors, such as gang violence or inadequate law enforcement. But many people seemed incapable of seeing how contempt for women could drive those other elements, she said.

“We can analyze this incident from many angles: cultural, regional differences, legal. But the core of all these angles is gender,” said Ms Huang. “If we can’t even admit that, this problem will be very difficult to solve.”

Because China has few laws that explicitly address gender-based violence, she added, many people don’t have the framework to understand the attack in terms of gender. The attackers were charged with “picking and causing trouble” and intentional assault.

As a sign of the often still hostile environment for feminist activism, even some who expressed sympathy for the cause urged women not to be too confrontational.

Laura Yu, a Beijing lawyer who is originally from Tangshan, said the video had infuriated her. But if women seemed overly angry, they would feed men who saw feminism as a threat to their own rights.

“It’s not that I want to compromise,” she said. “It’s that if I don’t compromise, I can’t achieve anything.”

Some state media and nationalist commentators have long viewed feminists as extremists. Even as state media denounced the attack in Tangshan, the censors removed several articles claiming the problems were systemic, including one linking the attack to the Jiangsu chained woman’s case. Weibo said it had closed more than 1,000 accounts, some for “inciting gender conflict.”

And there are so many more cases that never get this much attention, said Ms. Feng, the feminist activist.

“There are so many incidents that have not been filmed,” she said. “Violence against women of any kind is really nothing new in our society.”