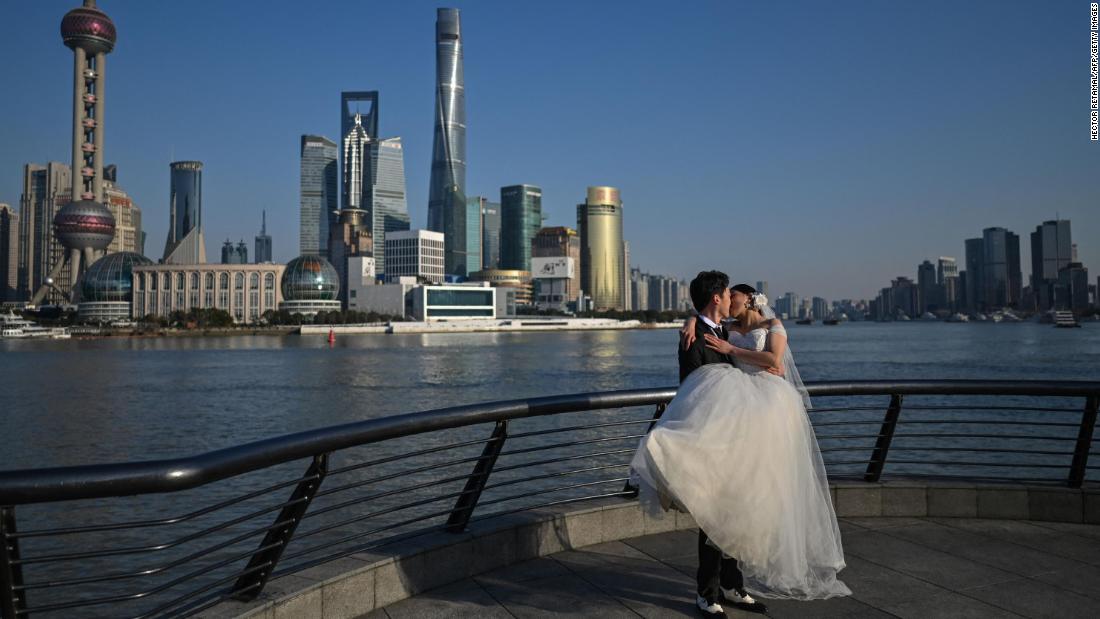 There were 7.6 million marriage registrations in 2021, according to data released last week by China’s Ministry of Civil Affairs.

That’s the least since 1986, when the ministry began making the numbers public, according to the state-run tabloid Global Times. It is a 6.1% decrease from the previous year and the number of marriages has fallen for the eighth consecutive year.

At the same time, the average age of newlyweds is rising: nearly half of those who married last year are 30 and older.

Experts say the knock-on effect on what is already a shrinking workforce could have a serious impact on the country’s economy and social stability.

In just six years, the number of Chinese people marrying for the first time has fallen by 41%, from 23.8 million in 2013 to 13.9 million in 2019, according to China’s National Bureau of Statistics.

The decline is partly due to decades of policies designed to limit population growth in China, meaning fewer young people of marriageable age, Chinese officials and sociologists said.

But it is also a result of changing attitudes to marriage, especially among young women who are becoming more educated and financially independent.

Faced with widespread discrimination in the workplace and patriarchal traditions — such as the expectation that women are responsible for childcare and housework — some women become disillusioned with marriage.

Statistics show that both sexes delay marriage. According to the Chinese Academy of Social Sciences, between 1990 and 2016, the average age for first marriages increased from 22 to 25 for Chinese women and from 24 to 27 for Chinese men.

The decline in the number of marriages raises concerns about China’s looming demographic crisis as it struggles to boost a declining birth rate.

In 2014, the population of working age began to shrink for the first time in more than three decades.

The following year, the Chinese government announced an end to its one-child policy, which allowed couples to have two children, and increased that to three by 2021 — but both marriage and birth rates continued to fall.

China is not the only country struggling with this problem.

Governments in all three countries have introduced measures to encourage births – such as financial incentives, cash vouchers, housing subsidies and increased childcare support – with limited success.