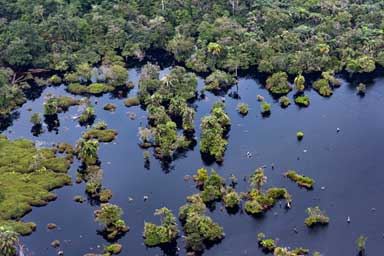 KINSHASA, June 16 (IPS) – Nine of the 16 oil blocks to be auctioned next month in the Democratic Republic of the Congo (DRC) overlap protected areas, according to a review of official government maps by Greenpeace Africa.

Minister Didier Budimbu, who had previously insisted that “none” of the blocks overlap protected areas, confirmed Greenpeace’s findings in a statement yesterday.

Plans to auction rainforests for oil were reactivated in April, five months after the signing of a $500 million forest deal signed with the Central African Forest Initiative (CAFI) at COP26.

Greenpeace Africa and others have raised the alarm that three of the blocks overlap with the Cuvette Centrale peat bogs, a biodiversity hotspot with about 30 gigatons of carbon, equivalent to three years of global emissions. Oil drilling could release the vast reserves of carbon they store, warned University College London professor Simon Lewis.

That protected areas are also at risk became apparent last month when the Ministry of Hydrocarbons itself video with a map of six of the 16 blocks: five of which can be clearly seen overlapping protected areas.

The voiceover praises the “accuracy” with which blocks were “selected,” taking into account “environmental sensitivities,” and alleged input from unnamed environmentalists.

Another official online resource, the Forest Atlas from the Ministry of the Environment of the Democratic Republic of Congo, lists nine of the blocks overlapping protected areas, including a national park, wildlife sanctuaries and a marine park with mangroves.

The ministry’s statement to Greenpeace Africa reads: “It has been decided that protected areas containing mineral natural resources of high economic value will be delegated.”

While it describes the overlaps as “very negligible,” a simple review of the map shows significant overlap in at least three cases, including that of Upemba National Park, part of which covers about a third of the Upemba Block.

Greenwashing the auction of blocks overlapping peatlands and protected areas is the height of cynicism. It’s very disturbing to do that with such amateurism.”

In its statement to Greenpeace Africa, the ministry emphasizes that no areas within UNESCO World Heritage sites are auctioned and that overlaps are limited to other protected areas. However, Congolese law makes no distinction between protected areas when it comes to oil exploration.

Block 18, one of the few that does not invade a protected area, is only about twenty kilometers from Salonga National Park, a UNESCO site. In July 2021, the government of the DRC succeeded in removing Salonga from the list of World Heritage in Danger, after promising to keep UNESCO informed by 1 February 2022 of “the progress made towards the definitive withdrawal of the oil concessions”.

More than two months after the deadline, the government reported that the park’s steering committee decided on December 14, 2021 to “start actions for the final cancellation”. Rather than finally taking action, the government continues to plan to intervene.

“The mouth that says the right things about climate and biodiversity crises is separate from the hand that signs the contracts that make them worse. This disconnection also characterizes the donors of the DRC: their COP26 speeches in honor of the Congo rainforest have resulted in an agreement that is an open invitation to oil companies,” added Irene Wabiwa.

The agreement signed at COP26 does nothing to protect the peatlands of the Cuvette Centrale from the oil and gas industry, and makes hardly any more demands on the integrity of protected areas.

Rather than ban extractive industries therein, the Nov. 2 letter of intent aims only at harm reduction. It calls for a study “to determine the extent to which hydrocarbon titles overlap with and/or have an impact on protected areas, with a view to taking appropriate prevention or mitigation measures”.

Greenpeace Africa calls on the DRC government to cancel the auction of new oil blocks: “Instead of sending Congo on autopilot into a climate catastrophe, the government and the international community should invest in ending energy poverty by investing in clean and accessible accelerate renewable energy”, concludes Irene Wabiwa.