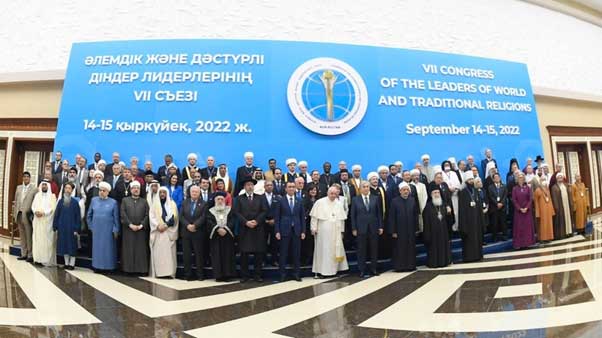 NEW YORK, Nov. 09 (IPS) — At the two-week COP 27 summit in Egypt, which concludes Nov. 18, a rough count indicates 40 different sessions will be hosted by, for and about religious engagements in/ on climate change and related matters. This is probably the highest number of events by and around religious actors, organized during a COP event.

The reason? Religions, religious involvement, interfaith, etc., are the flavor of our geopolitical times. For better and for worse.

His Holiness Pope Francis and His Eminence the Grand Imam of Al-Azhar just addressed a major conference in Bahrain on East-West relations with the King of Bahrain. After also making a similar appearance and speaking with the president of Kazakhstan in September. Both countries hosted large international gatherings of religious leaders, in the fanciest hotels, convened from many corners of the world, filled with lavish food banquets and generous hospitality and care for all their needs.

I should know because I am a very grateful recipient, albeit not a religious leader, but an aspiring minister of religious multilateralism. But here’s what I’m going for myself.

In convening, countries appear to be competing with Saudi Arabia, which hosted such a landmark meeting (in May 2022, where Buddhist and Hindu faith leaders came together for the first time as equals with their Muslim, Christian, and Jewish brethren), as well as with the UAE. , Qatar and Oman, which are also hosting international meetings of religious leaders this month.

This year alone there have been more than 50 gatherings of religious actors, that’s more than 2 a month, and this is not a comprehensive count.

Each of these large and rather expensive conferences provides a platform akin to the UN General Assembly, where each leader is given time (as they are always mostly men) to speak, often eloquently, about their own faith tradition.

Each of these speeches demonstrates the zealous efforts of faith/community/organizations to ensure peace and human dignity for all people. While recalling the spiritual wisdom that upholds every faith, they also speak of past and future initiatives designed to protect the dignity of all. Sometimes they also remember to speak about the planet and our responsibility to save it.

As someone who has served for decades at the United Nations and in various international academic and development organizations, and now listening to the religious actors speak, I ask myself the same question: if each of these governments, and now these religious bodies, are working so hard and so incredibly serving, why is our world as it is?

Why are so many governments and peoples and communities at war with each other within and beyond the borders of the nation-state? Why do we listen to hate speech from every kind of mouth and every kind of platform that gets enough media attention? Why are weapons and drugs the biggest industries?

Why are the rich getting richer and the poor getting poorer, while our planet is becoming more barren and dehydrated in one part and overflowing to death in another? Why is violence of all kinds, within families and within all communities, a pandemic? Why are medicines, and now even values, commodities with which to trade power and privilege?

Why is nuclear war back on the agenda of consciousness and politics? In short, why do we hate/fear each other so much and so deeply?

For what is wrong with our multilateral system, despite the speeches (and efforts) of political leaders (in and out of election time for those lucky enough to have real elections of their national leaders), and now also despite the speeches and works of religious actors, is essentially the same: every man for himself. Multilateral – as an adjective defined by the Oxford Dictionary, where “three or more groups, nations, etc. participate”, is an endangered species.

The United Nations, the main multilateral entity of 193 governments, is struggling to bolster multilateralism, but not necessarily by looking internally at their own massive infrastructure or culture. Ever seen an organizational chart of the United Nations system? One would. It is a universe of wonder where every human and non-human thought and action seems to have a specific office or some kind of structure.

But before we point the finger at the political multilaterals (who are remarkably good at ignoring faith communities, using them to the extreme, or both), we must ask ourselves, how often do we see or hear “three or more” religious institutions (that are not of the same faith) work together to actually meet the needs of different peoples around the world?

The answer is that in addition to the speeches, the lavish gatherings and countless projects, multilateral religious cooperation (where money and efforts of many and diverse are pooled together to serve the needs of all, regardless of gender, national, ethnic, race or religious affiliation) remains rare.

There’s plenty of evidence for this. HIV and AIDS, Ebola and the Covid pandemic highlighted how crucial religiously managed health infrastructure is for communities – rich and poor. A look at the education sectors, psychosocial care, migrants and displaced persons, and other humanitarian emergency areas will clearly show that religious institutions still serve many, widespread and in the most remote areas.

So it is not a lack of service to humanity that various faith actors have to come to terms with. It is the famine of multi-faith cooperation services – as in giving and doing together. At Religions for Peace, for more than half a century supporting interfaith platforms serving the common good in more than 95 countries, we live the challenges of multifaith cooperation, peace mediation, food and human security, migration and displacement, education, gender and empower women and work together to save the world’s remaining rainforests, including through the Interfaith Rainforest Initiative.

We know that even within the realm of religion, the way these challenges are handled tends to reflect the prevailing colonial mindset, tending to put one religion at the forefront, insisting on a singular branding and to seek greater political influence and financial resources.

More and more faith leaders – young and older – (rightly) expect financial compensation for their time and energy devoted to international work, slowly but surely reversing a trend of volunteering that used to be so characteristic of religious service and giving.

Just as governments fail to systematically work together as citizens and leaders of one planet, and just as too many civil society organizations and businesses compete for branding and “market share,” so do religious organizations.

Some religious entities replicate a secular catastrophic practice of building other/new/other/more ‘specialized’ entities and initiatives, rather than carrying the heavy cross to work together despite the destructive challenges (both pun intended). By doing this, many of these religious actors are effectively spreading their efforts.

One of the many lessons of failed multilateralism is that more, or different, or new and/or specialized, may well be the well-intentioned road to hell.

When it comes to actually investing in each other’s work so that they speak as one and serve together, many religious leaders and leaders of religious organizations will smile, say a few nice words and move on to the next sermon/meeting/international conference, or persistently pursue their own special/unique initiative(s).

Such that we now have so many religious initiatives, dominated by one or a bilateral religious partnership, or two and a half (relatively symbolic representation of another faith), working on the same challenges facing all of humanity.

What is lacking in multilateralism is not the absence of resources, instruments, values, the clarity of the crisis, or even the will and creativity to serve. Multilateralism fails when some want only their values, truths, communities, nations, cultures, security needs and/or specific institutions to prevail.

And with the failure of multilateralism is also a failure of the common humanity and the survival of the planet.