But more than 250 days later, as winter sets in and inflation rises, their resolve is put to the test as public concern about the ramifications of a protracted war brews.

At the same time, analysts are warning that a potential critical vote win in next week’s US midterm elections could break the West’s unwavering support for Kiev.

Moscow has armed its energy resources, on which Europe is heavily dependent.

While trying to get rid of Russian gas, European countries are rushing to find alternatives and energy-saving strategies.

Germany postponed the closure of its power plants, the Czech government exchanged old light bulbs in its offices for less consuming LED sources.

Italians have lowered the thermostat to 19 degrees Celsius and were advised to cook pasta on a lower heat.

Louis Vuitton’s parent company, LVMH, said the lights in its stores would be turned off earlier, a move followed by Valentino and other luxury brands.

European countries have also met and exceeded a November target to fill at least 80 percent of natural gas storage facilities.

Still, the coming cold months could provide the right conditions for Putin to indirectly sow unrest and test Europe’s support for Ukraine.

In September, the Russian leader threatened to deprive the European Union of energy, saying at an energy forum in Vladivostok: “We will deliver nothing at all if it contradicts our interests, in this case economic [interests]. No gas, no coal, no oil, nothing.”

Despite storage levels, Europe still needs the steady, even fragmented, flow of natural gas from Russia through pipelines under Ukraine, Rafael Loss, an EU security expert at the European Council on Foreign Relations, told Al Jazeera.

“If these are disrupted, for example through sabotage, energy rationing with significant consequences for households and industries could become necessary,” said Loss.

Next year’s winter is expected to be even harsher as new supplies from North America, the Gulf and Norway cannot fully offset Russian imports and are slow to come online.

Putin hopes Ukrainian refugees will flood neighboring countries to escape what will be an extremely cold winter in the war-torn country, Loss said.

Since mid-October, Russia has renewed its war effort, storming Ukraine with waves of air strikes and damaging 30 percent of its energy facilities.

“If Russia manages to fuel social unrest through the energy war, a migration crisis and its disinformation campaign…these could translate into dwindling European support, which is Russia’s goal,” Loss said, adding that support to Ukraine so far remains a priority over the bloc.

Rising energy costs threaten economic recovery, limit household purchasing power, damage the productive capacity of our industries and could undermine our countries’ commitment to Ukraine, he said at the UN General Assembly in September. 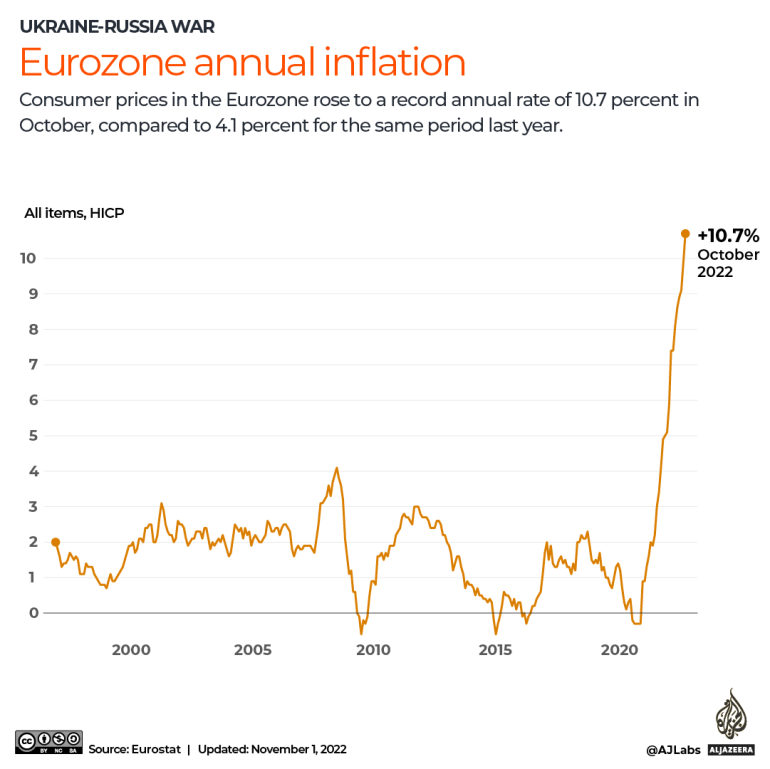 Anger is growing as European governments pledge more military and financial aid to Ukraine as their citizens’ savings disappear in the face of the rising cost of living.

On Monday, inflation peaked to a new record, standing at 10.7 percent. In October last year it was still 4.1 percent.

In the past two weeks, protests have erupted from France to Romania, with workers demanding better salaries to keep up with rising costs.

In Germany, protesters urged their government to reverse fiscal policy as the cost of fuel and food becomes prohibitive for many.

The worst may be yet to come.

“We expect the unrest to increase as inflation is expected to remain high,” said Capucine May, a Europe analyst at Verisk Maplecroft.

Its risk intelligence firm reported in September that civil unrest was on the rise in 101 countries as a result of rising living costs.

But while discontent is rife in countries that support Ukraine, aid to Kiev “isn’t the main cause of unrest at the moment,” May said.

In recent weeks, Europe has witnessed the dizzying effects of economic volatility.

Liz Truss’ government in the United Kingdom lasted 44 days – the shortest cabinet in British history – after her disastrous budget plans rocked financial markets and plunged the British pound to a record low.

And in the EU, cracks are emerging among the public.

An October report from IFOP, an international pollster, shows that French public support for sanctions against Russia fell to 67 percent in October from 71 percent in March, while in Germany it fell to 66 percent from 80 percent.

In Italy, a recent survey by the IPSOS survey suggests that support for Ukraine has fallen to 43 percent to 57 percent.

While Nathalie Tocci, the director of the Rome-based think tank Institute of International Affairs (IAI), believes a sense of war fatigue is exacerbated by the economic crisis, the trend is inconsistent in policy terms.

“There could be a reduction in military support, but even then the real country that makes the difference is the US, not Europeans,” she said. 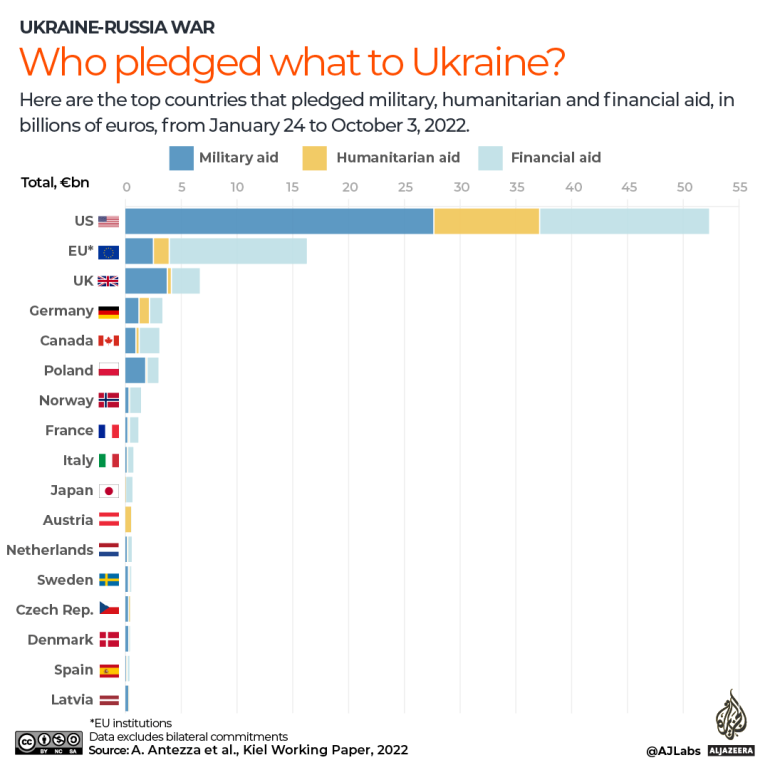 The US has so far pledged 27.6 billion euros ($27 billion) in military aid to Ukraine. By comparison, the pledges from the UK, Germany and Poland — the three largest military donors after the US — together amount to 6.76, four times lower than Washington’s.

Tocci argued that looking ahead, the results of the US Congressional midterm elections on November 8 could influence the EU’s approach to Ukraine.

While the race for the Senate is tight, the Republican party has a strong preference for winning in the House of Representatives.

If such a scenario materializes, Republicans would have enough power to make it more difficult for President Joe Biden’s administration to provide additional military or financial aid to Ukraine. This is because Congress has to approve federal budgets that support Ukraine.

“They wouldn’t have such a problem with Ukraine, but rather make everything impossible for the Biden administration, including delaying aid to Ukraine,” Tocci said, pointing out that the Republicans expected to win the House have supporters. are from former President Donald Trump, whose goal is to undermine the Biden agenda in the run-up to the 2024 presidential election.

A report by the Eurasia group in October found strong support among Democratic and Republican voters for the current US approach to Ukraine. Kevin McCarthy, the highest-ranking Republican poised to lead the House, however, has suggested a policy change could emerge.

“I think people will be in a recession and they won’t write a blank check to Ukraine,” he said.

If US support for Kiev wanes, Tocci said, Ukraine’s fight against Russia could stall in a few months.

In the event of a standstill, “a realpolitik mindset would prevail among Europeans, preferring to stabilize things as they are because they would not be able to make a difference,” Tocci said.