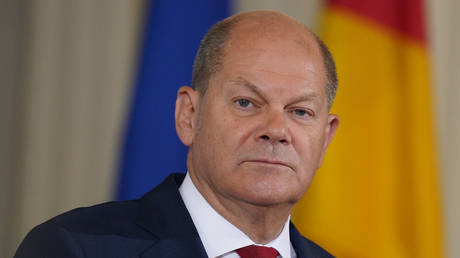 †Playing an offended liverwurst doesn’t sound very statesmanly,Melnyk told the German DPA news channel on Tuesday, adding:We are talking about the most brutal war of extermination since the Nazi attack on Ukraine, it is not a kindergarten.†

However, the Ukrainian official noted that his comment did not mean that Chancellor Scholz was not welcome in Kiev. More than “symbolic visits,“But, said Melnyk, Ukraine would appreciate Germany”implementation of the motion of the Bundestag on the supply of heavy weapons and the fulfillment of previous promises.†

The diplomat also criticized Berlin for failing to supply ammunition for the Gepard self-propelled anti-aircraft guns, which Germany promised to ship to Ukraine in late April. The delivery would be the first batch of heavy weapons delivered to Kiev by Berlin since Russia launched its offensive on February 24.

Melnyk’s “liverwurst” comment came shortly after Chancellor Scholz told Germany’s ZDF TV channel that Ukraine’s refusal to host President Steinmeier on April 13 stood in the way of Scholz’s own potential visit to Kiev. Scholz described the stump as a “remarkable example,noting that Steinmeier was re-elected as president in February and enjoyed the support of the vast majority of German MPs at the time.

Steinmeier was due to visit Kiev on April 13, along with the leaders of Poland and the Baltic states. However, the Ukrainian authorities gave him a signal the day before that he “not wanted” in Kiev because he had good relations with Moscow.

The German Chancellor said it cannot be that Germany has foreseen “so much military aid, so much financial aid‘ to Ukraine and is then told that the president cannot visit.

Ukraine has criticized the German government for what it sees as lackluster military support and an unwillingness to make a clear cut with Russia’s energy exports.

While serving as foreign minister in Angela Merkel’s government, Steinmeier developed an action plan to ensure implementation of the Minsk accords, which became known as the “Steinmeier formula.”

The plan aimed at ending the bloody conflict in the Donbass and envisaged that the two breakaway republics of Donetsk and Lugansk would hold elections under Ukrainian law and supervised by the OSCE, after which they would be given special self-government status and control over their borders with Russia would return to Kiev.

However, although Ukraine, Russia, the OSCE and the two regions gave the green light in October 2019, the plan failed to get off the ground, amid fierce opposition from Ukraine’s nationalist opposition.

Russia attacked its neighbor in late February after Kiev failed to implement the terms of the Minsk agreements, first signed in 2014, and Moscow’s eventual recognition of the Donbass republics of Donetsk and Lugansk.