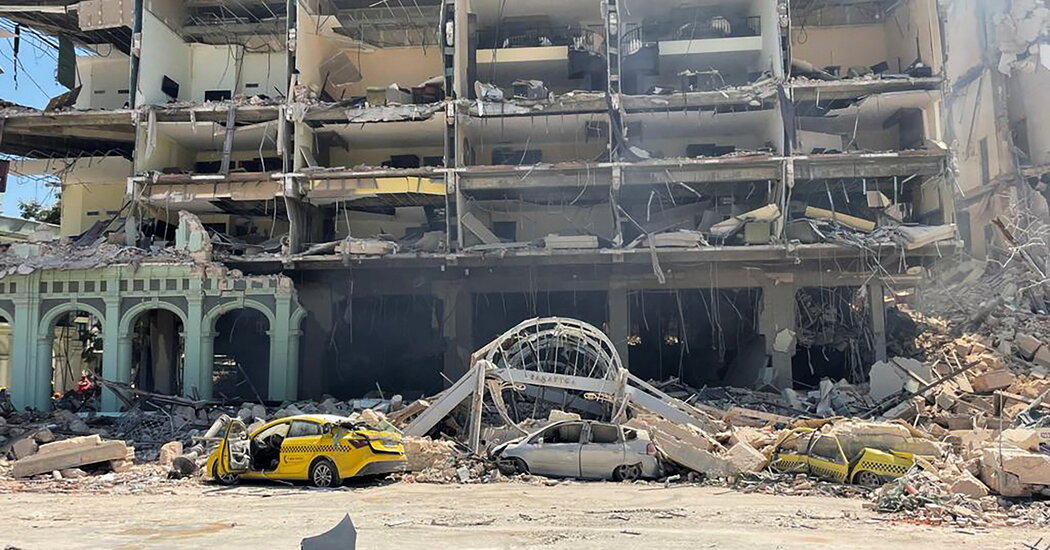 At least 22 people were killed and dozens were injured, the president’s office said. More were missing. The dead included a pregnant woman and a child.

The devastating explosion came as Cuba attempted to revive a tourism industry that is a key pillar of its fragile economy, which had been turned upside down by the pandemic.

Videos and photos shared on social media showed ambulances arriving at the scene and much of the facade of Hotel Saratoga being destroyed. Debris piled up in the street and smoke rose into the air.

“There was a stench, like a chemical, burning your nose,” said Miriam Díaz, 56, a Havana resident who lives behind the hotel and was on a bus home at the time of the blast. “We couldn’t get out because the door wouldn’t open.”

The hotel, a popular destination for international visitors and celebrities, was undergoing renovations and was closed to guests at the time of the blast, government officials said.

Cuban President Miguel Díaz-Canel went to the scene shortly after the explosion, along with Prime Minister Manuel Marrero Cruz. The office of the Cuban presidency said on Twitter that preliminary investigations found the explosion, shortly before 11 a.m., was caused by a gas leak.

At least 64 people, including 50 adults and 14 children, were initially hospitalized as a result of the blast, officials said. Many apartments were damaged and the affected residents were moved to a safe location while repairs were made.

“Havana is in shock today after the accidental explosion of a gas tank at the Hotel Saratoga, causing much of the building to collapse,” Mr Díaz-Canel wrote on Twitter. “Our deepest condolences and heartfelt support to the families and friends of the victims.”

The explosion at a prominent hotel was reminiscent of a series of hotel bombings in Havana in the 1990s linked to militant exiles. But authorities were quick to dispel any speculation that the explosion had been intentional.

“This was in no way a bomb or an attack,” Díaz-Canel told reporters at the scene. It was “an unfortunate accident”.

The president’s office added that search and rescue efforts were still underway, with people possibly still trapped in the rubble. Officials suggested the blast happened just outside the hotel.

“I felt the explosion,” said Pablo Morales, 21, an engineering student who lives just a few blocks from the hotel. “It shook the street. It shook the ground. It shook the windows.”

An iconic building from the 19th century, Hotel Saratoga reopened in 2005 as a five-star luxury hotel. The hotel was closed for two years due to the pandemic, according to the Facebook page, and was set to reopen next week.

Among the damaged buildings was the nearby Concepción Arenal School. A teacher at the school, who declined to give her name, said several students had been injured. She said the windows had been blown out, with shards of glass flying quite a distance.

The local director of education told Cuban media that five students were injured in the blast.

“It’s shocking,” said Ms Díaz, whose daughter goes to school but was unharmed by the blast. “It’s really, really heavy.”

State media reported that children had been evacuated to the Capitol after the blast, and officials later said students would be able to move to another facility starting Monday.

A nearby church was also badly damaged.

“The walls fell completely down. The roof of the church collapsed,” said Mr. Morales, who was a parishioner. “All the windows, there wasn’t one left – not in the church and not in the Martí Theater in front of it.”

As rescuers moved in, Mr. Morales that he saw people being pulled from the rubble. At least three were dead.

“They have been destroyed,” he said. “You could see a lot of blood.”

The Cuban Communist Party newspaper Granma said on Twitter that the explosion happened “while liquefied gas was believed to be being transported from a truck”.

The explosion came as Cuba’s all-important tourism industry began to recover after being badly hit by the pandemic. The island nation was closed to visitors for months, sending Cuba into one of the worst economic crises in history.

“This should get people thinking about whether Havana is really ready to reopen,” said Renata Keller, a Cuba expert at the University of Nevada, Reno. Cubans “really need this recovery in the tourism industry and this explosion is not going to help.”

The disappearance of tourists robbed Cuba of vital foreign currency on which it relies heavily, exacerbating the financial challenges posed by the decades-long US embargo.

The economic crisis sparked one of the largest protest movements in Cuban history, with thousands of people taking to the streets in cities across the country. Subsequent government crackdowns have resulted in the incarceration of dozens of people for crimes including sedition.

The explosion happened days after Cuba hosted an international tourist fair in the nearby resort town of Varadero.

Shortly after the explosion, calls spread on social media to donate blood to help the victims of the explosion. Photos shared online showed Cubans queuing to donate at a blood bank in Havana.

“Our solidarity with the victims and those affected, as well as with the people of this dear brotherly nation,” Mr Ebrard said on Twitter.

Originally built in 1880, the Saratoga was considered one of the most important hotels in Havana during the 1930s, according to its website. It initially served as a tobacco warehouse and shop, along with some apartments. It was built in a different location before being moved to its current address on Paseo del Prado, a long and popular avenue that runs through Havana. In the 1930s it was converted into a hotel.