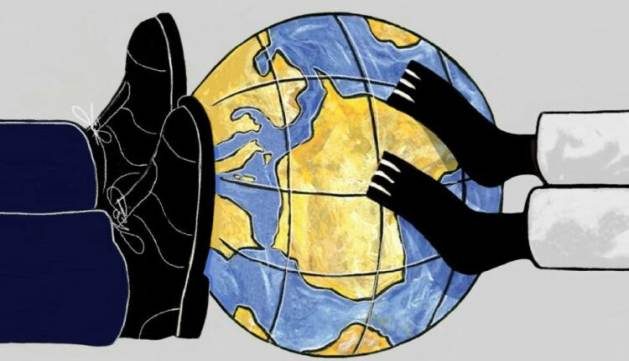 MADRID, January 25 (IPS) – Gone are the days when disasters were measured by human suffering. Now, with one exception: Ukrainians who are victims of the Russian invasion, everything is calculated only in money.

Following such a solid trend, major financial, corporate-focused institutions, such as the World Bank, International Monetary Fund and European Central Bank, are now committed to calculating if and how big the recession will be, ergo, how much money could be gained or lost, obviously through the Ukrainian proxy war.

They, like the establishment politicians and media, talk only about inflation, stagflation, economic (read financial) slowdown and commerce.

Rarely is there any mention of the casualties and human suffering of the other 56 armed conflicts that are still spreading around the world. Haitians don’t matter, so do Yemenis, Syrians, Somalis, Ethiopians and a long list of people whose lives have been broken by wars and climate catastrophes they didn’t create.

Yet another testament to this trend, a global movement of people working together to end the injustice of poverty: Oxfam International, has now revealed that the richest 1% have pocketed almost twice as much wealth in the past two years. has like the rest of the world.

“The richest 1 percent grabbed nearly two-thirds of all $42 trillion in new wealth created since 2020, almost twice as much money as the poorest 99 percent of the world’s population, reveals Oxfam’s new report “Survival of the Richest.

“Over the past decade, the richest 1 percent have captured about half of all new wealth.”

The super-rich are surpassing their extraordinary hold on half of all new wealth in the past decade, and billionaires’ fortunes are rising by $2.7 billion a day, even as at least 1.7 billion workers now live in countries where inflation is faster than wages, it reported on January 16, 2023.

“A tax of up to 5 percent on the world’s multimillionaires and billionaires could raise $1.7 trillion a year, enough to lift 2 billion people out of poverty.”

“Survival of the Richest” was published on the opening day of the World Economic Forum in Davos, Switzerland. In it, Oxfam explains, the elites are gathering in the Swiss ski resort as extreme wealth and extreme poverty have increased simultaneously for the first time in 25 years.

The wildest dreams of the rich

“While ordinary people make daily sacrifices for essentials such as food, the super-rich have surpassed even their wildest dreams. Just two years later, this decade will be the best yet for billionaires — a roaring 1920s boom for the world’s richest,” said Gabriela Bucher, executive director of Oxfam International.

“Taxing the super-rich and big corporations is the way out of today’s overlapping crises. It’s time we busted the convenient myth that tax cuts for the wealthiest result in their wealth somehow “dripping down” to everyone else. Forty years of tax cuts for the super-rich have shown that a rising tide doesn’t lift all the ships — only the superyachts.”

The rich are catching $16 trillion

Billionaires have seen an extraordinary increase in their wealth. During the pandemic and crisis years since 2020, $26 trillion (63 percent) of all new wealth was captured by the richest 1 percent, while $16 trillion (37 percent) combined went to the rest of the world.

A billionaire earned about $1.7 million for every $1 in new global wealth earned by a person in the bottom 90 percent. Billionaires’ fortunes have increased by $2.7 billion a day. This comes on top of a decade of historic gains — the number and wealth of billionaires has doubled over the past decade, the report adds.

“The wealth of billionaires increased in 2022 with rapidly rising food and energy profits. The report shows that 95 food and energy companies will have more than doubled their profits by 2022. They made $306 billion in windfall profits and paid out $257 billion (84 percent) to wealthy shareholders.”

Oxfam also reports that the Walton Dynasty, which owns half of Walmart, received $8.5 billion last year. Indian billionaire Gautam Adani, owner of major energy companies, has seen his wealth rise by $42 billion (46 percent) in 2022 alone. Excess corporate profits have driven at least half of inflation in Australia, the US and the UK.

At the same time, at least 1.7 billion workers now live in countries where inflation is faster than wages, and more than 820 million people — about one in ten people on the planet — go hungry. Women and girls often eat the least and last, making up nearly 60 percent of the world’s hungry population.

“The World Bank says we are seeing probably the biggest increase in global inequality and poverty since World War II. Entire countries are at risk of bankruptcy, with the poorest countries now spending four times more on repaying debts to wealthy creditors than they do on health care.”

Oxfam is calling for a systematic and far-reaching tax increase on the super-rich to reclaim crisis profits generated by public money and profit-seeking. Decades of tax cuts for the wealthiest and corporations have fueled inequality, with the poorest people in many countries paying higher tax rates than billionaires.

It explains that Elon Musk, one of the world’s richest men, paid a “real tax rate” of about 3 percent between 2014 and 2018. Aber Christine, a flour seller in Uganda, earns $80 a month and pays a 40 percent tax rate.

And that only four cents of every tax dollar worldwide now comes from taxes on wealth. Half of the world’s billionaires live in countries with no inheritance tax for direct descendants.

“They will pass on to their heirs a $5 trillion tax-exempt treasury, more than Africa’s GDP, which will propel a future generation of aristocratic elites. Rich people’s income is largely unearned, derived from returns on their wealth, yet it is taxed on average at 18 percent, just over half the average top tax rate on wages and salaries.”

According to a new analysis from the Fight Inequality Alliance, the Institute for Policy Studies, Oxfam and the Patriotic Millionaires, an annual wealth tax of up to 5 percent on the world’s multimillionaires and billionaires could raise $1.7 trillion a year…

… This figure would be enough to lift 2 billion people out of poverty, fully fund the shortfalls on existing humanitarian appeals, create a 10-year plan to end hunger, support poorer countries that are being ravaged by climate impacts, and providing universal healthcare and social protection for everyone living in low and lower middle income countries.

Is there a chance this will ever happen?

How (much) are you today?, Inter Press ServiceWednesday, January 25, 2023 (posted by Global Issues)