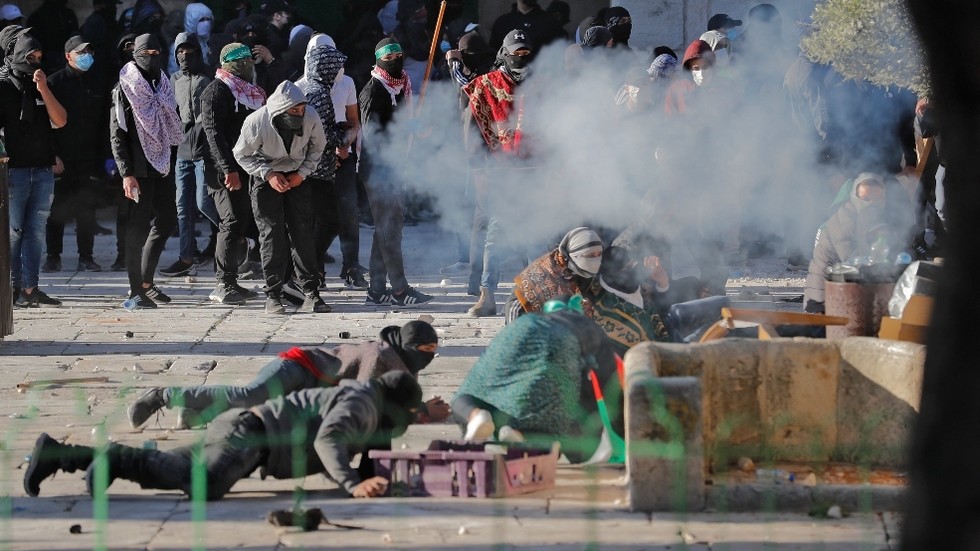 A group of Palestinians threw rocks and clashed with Israeli police on Friday in the grounds of the Al-Aqsa Mosque in Jerusalem’s Old City. Police said they entered the mosque to disperse rioters who prevented worshipers from praying.

In the early morning, worshipers gathered on the Temple Mount, home to the most important holy sites of both Muslims and Jews.

According to the Israeli police, some Palestinians carried flags of the Palestine Liberation Organization and the militant group Hamas and started throwing stones and fireworks at the officers.

Some threw rocks at Jews praying at the Western Wall, while others barricaded themselves at Al-Aqsa Mosque, where they continued to throw objects at officers and prevent other Muslims from praying, police said.

As the communities of Jerusalem celebrate the second week of the holy month of Ramadan, on the Friday of Sorrows Night – Palm Sunday, Easter and Passover – Israeli soldiers raided the holy Al Aqsa mosque, firing bullets, grenades and tear gas canisters.pic.twitter.com/xEqisU6Fjy

Agent Eliyahu Levy told Army Radio that police waited until morning prayers ended before entering the mosque and dispersing the rioters. The mosque told Israeli media that about 400 people were being held.

Police said three officers were injured when they were pelted with stones. The Palestinian Red Crescent humanitarian group, meanwhile, reported that 152 Palestinians had been injured, some with… “rubber bullets” and tranquilizer grenades.

Israel’s foreign ministry later said the mosque had reopened for prayers after the rioters were removed, and thousands of worshipers continued to come throughout the day, urging everyone to remain peaceful.

Hamas, which rules Gaza, was quoted by Bloomberg as condemning the… “brutal attacks” by the Israeli police and warning that Israel will bear “all the consequences.”

The clashes took place days after Israel deployed troops in the West Bank city of Jenin, where the Palestinian health ministry said six local residents were killed. Tel Aviv said the raids were designed to wipe out extremists after a spate of terrorist attacks between late March and early April that killed 14 Israelis.

“We will always and everywhere achieve what is necessary to eradicate these terrorist operations,” That said Prime Minister Naftali Bennett last weekend.