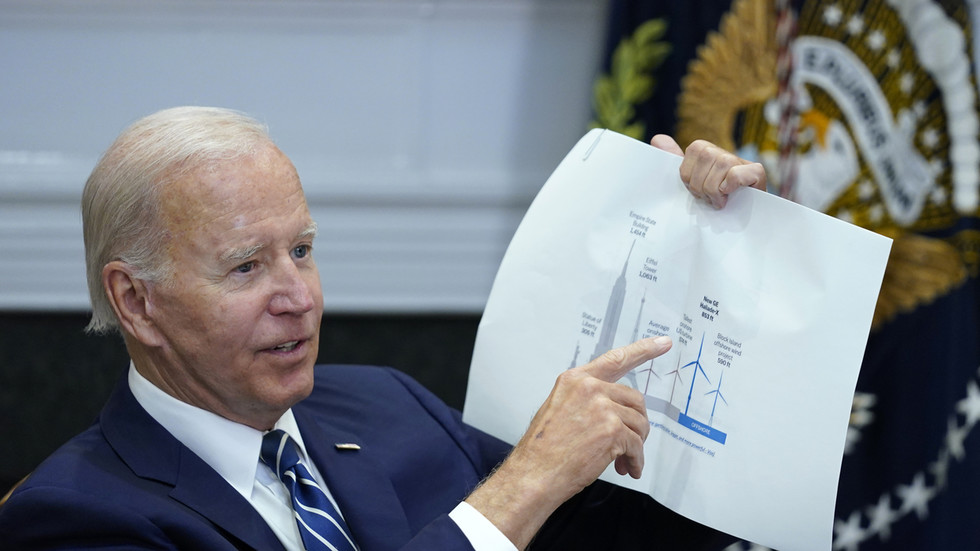 US President Joe Biden accidentally showed a prepared note card with step-by-step instructions for basic actions during a press conference, including how to enter the room, where to sit, and how long to speak.

While addressing reporters at a “Meeting on Federal State Offshore Wind Implementation Partnership” on Thursday, Biden saw the “cheat sheet” read aloud, and at one point held it up long enough for photographers to get a clear shot.

“YOU enter the Roosevelt Room and say hello to the participants,” the note card started, also to remind the president “You take a seat” before the journalists arrived.

The bulleted list instructed Biden to give “short comments” before addressing labor chief Liz Shuler, who leads the AFL-CIO and attended the meeting remotely. He was then ordered to “thank you participants” and “leave.”

While the notes appeared to be very accurate for such basic gestures, a former White House communications officer told Fox News that the map was tracking “a very standard format used by politicians and government officials at public events”, adding that it was also employed by Biden’s former boss, ex-President Barack Obama.

Still, Biden’s notes have made headlines in the past, with a staffer seeing the commander-in-chief pass a message informing him that there was “something on” [his] chin” at an event last July. More recently, after he appeared to have demanded the impeachment of his Russian counterpart Vladimir Putin in March, the president was spotted with a sheet titled “Tough Putin Q&A Talking Points,” who advised him on answering questions from journalists.

Biden’s predecessor Donald Trump drew similar press attention for his notes, in one instance seen with simple prepared responses — such as “I hear you” — during a session at the White House with victims and relatives of the 2018 mass shooting at Marjory Stoneman Douglas High School in Florida.