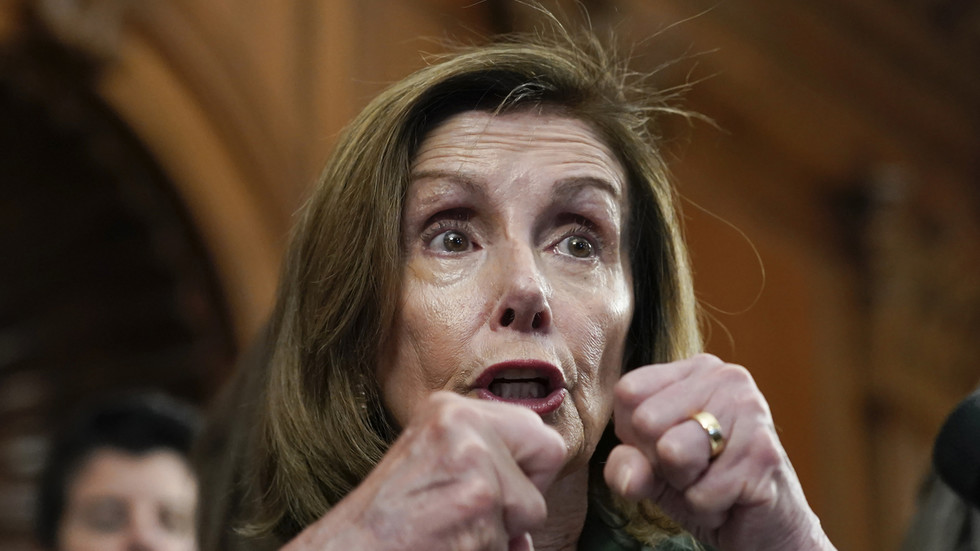 Top US officials think it’s acceptable to go against China’s red lines. It may not lead to war now, but will increase the danger later on

US House Speaker Nancy Pelosi appears to be about to embark on a trip to Taiwan, an event to which China has vowed to respond with “strong measures.The visit is a repeat of a visit she originally planned to make in April, but was prevented when she tested positive for Covid-19. If it goes through, it would be the first visit by an American house speaker to the island in 25 years. The latter was Republican Newt Gingrich, but the crucial difference was that he did so as an opposition politician to then-President Bill Clinton, a Democrat.

This time, as part of the majority party, Pelosi is reportedly leading a delegation on an Asian tour at a time of unprecedented tension. The trip also coincides with the anniversary of the founding of China’s People’s Liberation Army (PLA), which falls on August 1. While President Joe Biden, as well as the US military, have expressed objections to the venture, this doesn’t seem to have deterred Pelosi so far, with Republican hardliners now applauding her and saying the US will appear weak if she pulls out.

This creates an extremely unfortunate dilemma, especially given Thursday’s phone call between Biden and Chinese President Xi Jinping, in which Xi warned Washington to “play with fire” with regard to Taiwan. But in reality, such talk has rarely meant anything, as the US, when it comes to serious action, has never really been willing to de-escalate tensions with China, act pragmatically or with common sense. While it’s true that Pelosi isn’t technically the government and wouldn’t go there on their behalf, the fact that this event is happening indicates how unhinged the broader spectrum of US foreign policy has become. There is no restraint or respect for the red lines of other countries, just the pursuit of maximalist goals at all costs.

Many people thought that former President Donald Trump was insane and chaotic, but an unspoken truth is that US foreign policy has actually deteriorated further under Biden. While Trump pursued narrow self-interest in the name of “America first,” which offended friends and foes alike, the Biden administration has not only embraced this doctrine, but refined it into an ideological crusade that seeks to force U.S. hegemony on every front on a manner that is both diligent and uncompromising. We should not dismiss Trump’s comments that if he were president, the conflict in Ukraine would not be happening now, and he would probably have struck a deal to prevent it.

As a result, the US has continued to mock China’s red line on the Taiwanese issue and continue to act against it, while at the same time officially claiming at the presidential level that their policies remain the same to reassure China. This is a strategy described by Beijing as “Slicing Salami,” which seeks to gradually shift the status quo toward independence from Taiwan while claiming not to do so in order to avoid strategic disruptions that could lead to conflict. . It’s provocative, yet subtle. What Biden has failed to explain, however, is the fact that Congress is even less restrained than he is. The massive propaganda about US support for Ukraine has left many overconfident in the belief that China has been forced to “think twice” about Taiwan, and as a result ultra-hawks, especially in Congress, are now happy to pushing this button further into believing they can call Beijing’s bluff.

But if this visit takes place, will it lead to war? This can be an overreaction for many obvious reasons. China will not invade Taiwan if Nancy Pelosi visits. Such a situation nevertheless forces Beijing into a corner to retaliate in a way that re-legitimizes its claim to the island and avoids political humiliation. If their bluff is called, their redline loses credibility, and the logic of deterrence means something must be done to restore the balance. That’s why China means what it says when it promises countermeasures. However, it remains unclear to what extent Beijing will tackle this exactly.

One thing that is clear, looking at past crises in the Taiwan Strait, is that China is likely to conduct large-scale military exercises in one way or another. The US is already responding to this by moving military assets to the area. However, there is also speculation that Beijing could go further by declaring a ‘no-fly zone’ over the island or taking a similar move that dramatically increases the risk of confrontation. Remember, when Mike Pompeo sent UN Ambassador Kelly Craft to visit Taiwan during their last week in office, the flight was canceled at the last minute following warnings from Beijing. This time China will no doubt respond in one way or another, but Pelosi and her supporters seem to think they can ridicule this, just as it was thought that Russia’s red line over Ukraine could be similarly ignored.

Ultimately, this just goes to show that US foreign policy has degenerated into a form of strategic madness. Fearing loss of status vis-à-vis rival states, the country’s political class has become increasingly reckless and destructive in the steps it is willing to take to maintain its hegemony. Even if this Pelosi visit doesn’t lead to open conflict, which it probably won’t, the damage it will do to strategic trust as a whole will likely be permanent, paving the way for conflict further down the line, something that many voices in Washington seem to enjoy it.