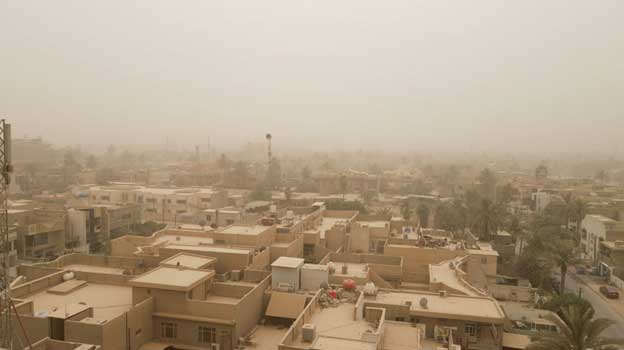 BEIRUT, Lebanon, June 1 (IPS) – We are in the midst of so many crises in the Middle East and North Africa (MENA) region: the most unequal, water-scarce, least democratic region in the world, with the largest gender gap, multiple armed conflicts raging over it, and fragile states on the brink.

The region has been battling sandstorms and dust for weeks, affecting the health and well-being of everyone, especially women and their children. In January, images of a snowstorm hitting refugee camps in Syria were terrifying.

Women shoveling snow and melting it to use for washing and cooking was a shocking insight into how women in our region will be burdened by the climate emergency. More and more people are feeling the heat of the climate crisis here, due to extreme weather conditions, heat waves, snow storms, desertification and drafts.

The International Panel on Climate Change has predicted that the MENA region will be one of the world’s regions most affected by climate change in the 21st century.1

On this World Environment Day, June 5, the urgency of the climate crisis is creeping closer to home. Oxfam’s recent report ‘Inequality kills’ warned that by 2030, 231,000 people could lose their lives a year from the climate crisis in poor countries. This is a conservative estimate, millions could die in the second half of this century.

The root of many of the challenges in MENA is the patriarchal nature of societies and the distressing levels of women’s participation. From the formal economy to government, women’s representation and participation rates are among the lowest in the world.

Women in MENA are being removed from the core of public life and political engagement, therefore our ability to face the next looming challenge of climate catastrophe will fail. Unless climate change is seen as a feminist issue – requiring a feminist response – its effects cannot be managed effectively.

Key to tackling the climate crisis is recognizing the inequalities it perpetuates and the impact of such inequalities on men and women in the region. There is no shortage of evidence that climate change is incredibly gender-related.

In 2018, the UN estimated that 80% of people displaced by climate change were women. It leads to internal displacement and migration, with women disproportionately subject to various forms of gender-based violence, taking on the bulk of family responsibilities such as water collection and care, and further entrenching poverty.

Women in many MENA countries are already forced to work less fertile land, reducing their ability to produce food and limiting their voices.

As the climate crisis continues at breakneck speed, we are vastly ill-prepared and under-equipped to manage and adapt its effects, as long as women do not have the power they need to be part of an effective response to this new climate normal.

As the time-honored rallying cry goes, there can be no climate justice without gender justice. One cannot be achieved without the other. We know that women in the region will be most affected by climate change. It leads to internal displacement and migration, with women disproportionately subject to all forms of violence as they assume responsibility for care work and domestic responsibilities.

The layered crises we face here in the region of gender inequality, inequality and climate are all interrelated, but the intersectionality of climate change and gender in MENA is ignored. It is often absent from government and civil society responses and even from the agendas of feminist movements and women’s rights groups, with fears that it could distract feminist action on issues such as poverty and gender-based violence.

However, the links are important because they are on the cutting edge of tackling systemic and oppressive power structures that favor rich countries over poor countries, urban centers over rural areas, those with education versus those without, those who have access to technology, verses those who don’t and end up being men over women.

For far too long in the region’s hierarchy of needs, climate change has been seen as the least pressing problem affecting lives, but we can’t determine which competing crises can and cannot wait.

As agricultural land dries up due to drought, water sources evaporate while rivers shrink and rainfall becomes scarcer, the climate impacts on the region are becoming more severe. Even worse, women are not at the forefront of conversations about the future.

They are left behind in the same way they are ignored in conversations about peace and security, reconstruction and economic recovery. Such conversations are controlled by the same power structures that created them. This time they can’t stay behind.

Climate justice cannot be seen as a matter of the West or of the privileged. It is an integral, cross-cutting issue that must go hand in hand with gender equality in order to be equipped to meet the growing challenges it poses.

There is no doubt that women are the key to meeting these challenges. The evidence is clear. By organizing, mobilizing and building voices, women can lead the climate conversation and set an agenda for change.

1 MAY (2017). Climate change: The Middle East faces a water crisis. Available at https://www.mei.edu/publications/climate-change-middle-east-faces-water-crisis