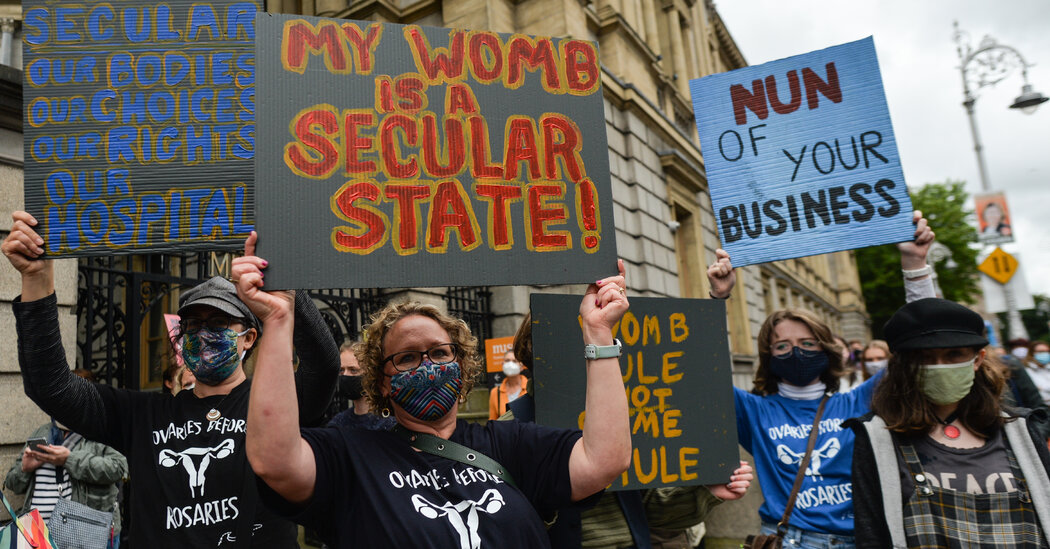 DUBLIN — The Irish government has postponed a decision on a plan to give control of an $840 million government-funded maternity hospital to a charity set up by an order from Catholic nuns. Abortion rights activists and opposition politicians oppose the plan, saying they fear the charity would apply Catholic doctrine on abortion and other matters to the running of the hospital.

The Irish cabinet was set to approve the plan on Tuesday but postponed a decision by at least two weeks amid mounting public controversy, fueled in part by a response to the United States’ leak of a draft opinion that suggested the Supreme Court could overturn Roe . v. Wade, the groundbreaking decision on abortion rights.

Bernie Linnane, the chair of the campaign group Our Maternity Hospital, said she believed the Supreme Court leak would amplify public protests against the plan in Ireland. Her group wants the state to take full ownership of the new hospital to protect public investment in it and ensure it provides abortion, birth control and voluntary sterilization services.

“Reproductive rights and reproductive justice are under threat on both sides of the Atlantic,” said Ms Linnane. “Reproduction rights are a global movement and we will support each other.”

More than 50 clinicians working at the current hospital, National Maternity Hospital, signed an open letter supporting the government’s plan that the hospital would turn over to charity. Health Minister Stephen Donnelly has said fears of religious interference are unfounded, noting that the new hospital’s constitution states that it will provide a full range of “clinically appropriate and legally authorized health care services”.

The controversy dates back to 2017, when the Irish government announced plans to move National Maternity Hospital, a private, non-profit primarily state-funded institution, to a new building on the Dublin campus of St Vincent’s University Hospital, also largely state-funded. but still owned, like many Irish hospitals and schools, by a Catholic order – in this case the Religious Sisters of Charity. The two hospitals would operate together under the name St. Vincent.

Ireland has been dominated by the doctrines of the Catholic Church for much of its history, and did not legalize abortion until 2018, after two-thirds of voters in an increasingly secular society supported the repeal of a constitutional ban. Long-standing prohibitions on divorce and contraception, based on Catholic teachings, were also ended by referendum or legislative changes.

Initially, the government agreed that the merged hospital would be owned by the nuns and managed by their representatives, in exchange for making the land available for the new building free of charge. The sisters later said they would withdraw from the plan after more than 100,000 people signed a protest petition.

In recent decades, as Ireland became more liberal and secular and religious callings declined, nuns and priests have all but disappeared from schools and hospitals, and many orders have transferred their properties to charities run by councils of lay people selected by the religious orders.

Women’s rights activists fear that the Religious Sisters of Charity or the Vatican may have played a role in the selection of the directors of the new holding. They also want the government to make public the legal safeguards it says it has put in place to prevent religious interference in the new hospital and to protect the public’s large investment in a private company. The health minister said this week he would release the legal details of the deal.

The Religious Sisters of Charity and St. Vincent University Hospital have not responded to requests for comment.

Opposition parties have called on the government to use its powers to force St. Vincent’s Holdings to sell the land for the new hospital and keep it state-owned. Roisin Shortall, a leader of the Social Democratic Party and a member of the parliamentary health committee, said no decision should be made until Parliament has had a chance to examine the deal.

“We have seen, with the reported imminent overthrow of Roe v. Wade in the United States, that rights, once secured, must continue to be fought for and advocated,” Ms. Shortall said in a statement. “We don’t want a similar reduction in Irish women’s reproductive rights sneaking in as a result of this government decision.”

dr. Peter Boylan, a former master or top doctor at the National Maternity Hospital, said it remained unclear who had appointed the board and shareholders of the new holding company, in which the Irish state has no representation. He noted a clause in St. Vincent’s Holdings’ financial documents stating that the directors would be “committed to upholding the vision and values ​​of Mary Aikenhead,” who founded the Religious Sisters of Charity in 1815.

dr. Boylan said he believed the break in the decision was a “golden opportunity” for the Irish government to take full ownership of the proposed site and maintain the independence of the existing maternity hospital: “The current status of the National Maternity The hospital has been working really well for over a hundred years, so why not keep it?”

National Maternity Hospital’s top physician, Dr. Shane Higgins, said in an interview that the corporate structure of the newly merged hospital would protect the clinical independence of the maternity hospital. He said there was an urgent need to move it from its current location in the city center, now over a century old and too small for its purpose.

“I think there are people, commentators, who don’t fully understand what is being proposed, and of the importance to future generations of this deal,” said Dr. higgins. “If this project does not go ahead, it will take another 20 years before a new national maternity hospital is built, and the state is calling for it. I think it is time to move on and build this hospital.”