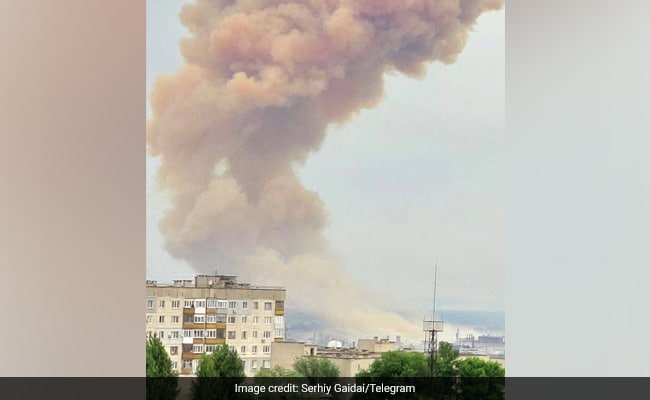 War in Ukraine: The battle for control of Severodonetsk has intensified this week by Russian forces.

Ukrainian President Volodymyr Zelensky accused Moscow of “madness” on Tuesday after Russian troops hit a chemical plant in their attempt to complete the capture of a key eastern city.

The battle for control of Severodonetsk has intensified this week, with heavy casualties on both sides, as EU leaders negotiate a ban on Russian gas to punish the Kremlin for its three-month-old invasion of its pro-Western neighbor.

Severodonetsk, one of the industrial hubs on the road from Russia to the eastern region of Lugansk, has become a target of massive Russian firepower since the failed attempt to occupy Kiev.

Russians now control most of the destroyed city, regional authorities said Tuesday, adding that enemy forces had hit a nitric acid tank at a chemical plant and warned people to stay indoors.

“Given the presence of large-scale chemical production in Severodonetsk, the attacks by the Russian army there, including blind aerial bombardments, are simply insane,” Zelensky said in a video message.

“But on the 97th day of such a war, it is no longer surprising that for the Russian army, for Russian commanders, for Russian soldiers any insanity is absolutely acceptable.”

Meanwhile, European Union leaders in Brussels were divided over banning gas from Moscow after agreeing to put an embargo on two-thirds of its oil to tighten economic screws.

These countries have downplayed the chances of an imminent gas ban, but Zelensky nevertheless expressed gratitude for the EU’s action so far against “the terrorist state” Russia.

“It is also important to understand that the abandonment of Russian oil and other fossil fuels by European countries will accelerate the transition to renewable energy sources,” he said.

“Strategically, this leaves the Russian state on the sidelines of the modern economy. With such an aggressive policy and a path of isolation from the civilized world, Russia simply won’t be able to adapt.”

The US State Department also praised the EU’s efforts, saying there was “broad support” among Washington’s allies for “cutting off the power of the Russian war machine”.

However, European Commission President Ursula von der Leyen suggested that Brussels had gone far enough with Russia’s fossil fuels and that it was time to focus more on the “financial and economic sector”.

The oil ban “will reduce about 90 percent of oil imports from Russia to the EU by the end of the year,” she said.

In the meantime, Denmark became the last European country to be targeted by Russia for gas exports, after the Netherlands, Finland, Poland and Bulgaria.

The situation on the eastern frontline in Donbas has become increasingly desperate, with Ukrainian cities under almost constant shelling by Russian forces.

A steady stream of vehicles brought some 1,350 people through an eastern Ukrainian checkpoint to Red Cross buses on Monday, desperate to flee the horrors of life in Russia-controlled territory.

The exhausted crowd, including women and children, crossed a dam that cut through a reservoir that serves as the line of demarcation between Russian and Ukrainian forces.

“I can breathe easier now,” Anna, a teacher who had fled with her children, ages 13 and 11, told AFP as she crossed the checkpoint.

Tetyana, a 19-year-old college student, said she was happy to be back in her “original Ukraine” after living in “the Russian world” for three months.

French journalist Frederic Leclerc-Imhoff was killed on Monday while reporting on civilian evacuations in the Donbas.

And a nighttime rocket attack in the city of Sloviansk has left at least three dead and six injured, Donetsk regional governor Pavlo Kyrylenko said on Telegram on Tuesday.

“There are no safe places in the Donetsk region, so I’m shouting again: evacuate — save your life,” he said.

Four more civilians died and seven were injured in Donetsk on Tuesday, he added in a later Telegram post.

A Ukrainian court on Tuesday sentenced two Russian soldiers to 11 and a half years in prison for shelling two villages in the northeastern region of Kharkov. Earlier this month, another was sentenced to life in prison for murdering a civilian.

But Russian Foreign Minister Sergei Lavrov said it is up to the West and Kiev to resolve the crisis, starting with the lifting of sanctions.

“It would be good if Macron came during the French EU presidency, and it would be best if he comes with more arms supplies to Ukraine,” he told French news channel LCI.

“That’s the most precious help we can get from France.”