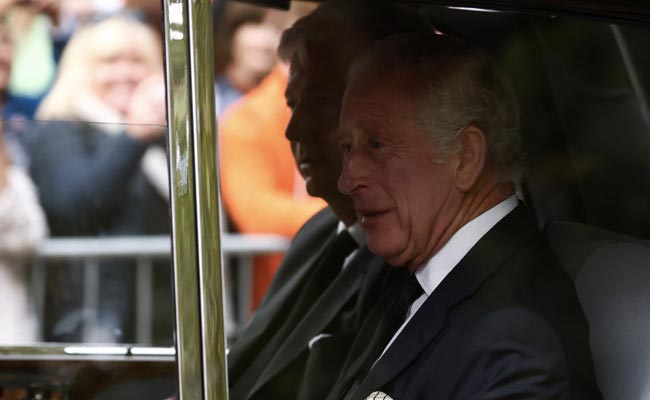 The so-called Vigil of the Princes takes 15 minutes. (File)

King Charles III heads to Wales on Friday for the last of his visits to the United Kingdom’s four nations, as preparations for the Queen’s state funeral accelerate.

With queues to see Queen Elizabeth II’s coffin stretching more than 4 miles long, Charles and his three siblings – Princess Anne, Prince Andrew and Prince Edward – had to hold a family vigil in front of the coffin.

The so-called Vigil of the Princes, with all four royals in ceremonial military uniform, lasts 15 minutes from 1830 GMT.

British officials on Thursday promised “a fitting tribute” to the Queen, who died last Thursday at the age of 96 after a record-breaking 70 years on the throne.

Her death has caused an outburst of emotions, with tens of thousands queuing for hours to pay their respects to the late monarch.

Charles, the longest-serving Prince of Wales in history until last week, was due to fly to Cardiff early Friday by helicopter.

A spokesman for the king said he had a “lifelong commitment to the people of the country” and would hold a private audience with Welsh Prime Minister Mark Drakeford during his visit.

The king was “resilient and hardworking” despite his loss, and “focused on leading the family, nation and empire and Commonwealth in mourning for Queen Elizabeth II,” the spokesman added.

The Queen will be honored Monday morning with a state funeral – the first Britain has seen in nearly six decades – at Westminster Abbey, with more than 2,000 expected guests.

After the service, the coffin will be transferred by royal hearse to the Queen’s home at Windsor Castle, west of London, for a devotional service in St George’s Chapel attended by many former and current royal associates.

A private funeral will follow, attended only by members of the royal family, in which the Queen will be buried next to her late husband Philip, parents and sister.

US President Joe Biden, Canadian Prime Minister Justin Trudeau, Australian leader Anthony Albanese and France’s Emmanuel Macron have all confirmed their attendance at the funeral, as have Japanese Emperor Naruhito and numerous other members of the royal family.

“The Queen held a unique and timeless position in all of our lives,” funeral organizer Edward Fitzalan-Howard, also known as the Earl Marshal, told reporters at a briefing.

“It is our aim and belief that… in the coming days, people around the world will unite and resonate with people of all faiths as they fulfill the wishes of Her Majesty and her family to pay a fitting tribute to an extraordinary government,” he said. .

The state funeral will follow four days after the Queen’s coffin is laid out in Westminster Hall.

The queue to enter the huge hall where the coffin has been since late Wednesday has attracted a seemingly endless stream of mourners.

The coffin is draped in the Royal Standard flag, with the Imperial State Crown, her ceremonial orb and scepter on it, with tall, flickering candles at each corner.

She and her aunt had queued all night for nearly seven hours for their fleeting moment in front of the coffin.

The gloomy atmosphere inside is completed with guards in ceremonial uniform who constantly watch around the stage.

Mourners have marked their moment in front of the coffin in a variety of ways, from bows or bows to the sign of the cross or by simply taking off their hats.

Some wiped their tears. Others brought babies in strollers. Old soldiers stopped and saluted their former commander in chief.

By early afternoon Thursday, the line had grown to more than 4 miles (4,4 km) along the south bank of the River Thames, where people had to wait all night.

Organizers have prepared up to 10 miles of queuing infrastructure, with hundreds of thousands expected to participate, particularly over the weekend.

Musician Jacqui Smith, who lined up on Wednesday night, was sad but excited about the new king’s reign.

“I’ve been waiting for it for a long time,” she told AFP from Lambeth Bridge, within sight of Westminster Hall. “I love the Queen, but I’m a real Charles fan.”

William and his wife Kate, meanwhile, traveled to Sandringham, the family’s private winter home in eastern England, to view the floral tribute left by members of the public.

Charles, 73, was appointed Prince of Wales by his mother in 1958 and on his first full day as monarch last Friday, he bestowed the title on his eldest son.

The historical title has been given to the heir apparent since the early 14th century.

Elizabeth’s youngest son, Prince Edward, 58, and his wife Sophie visited Manchester in the north west of England to view the civil condolence register in the city’s central library and floral arrangements.