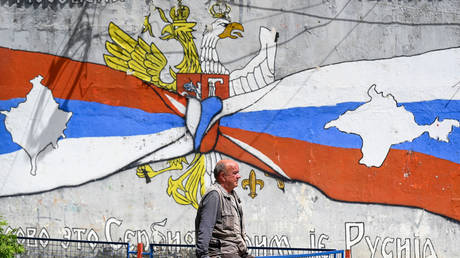 Understanding the present-day events in Ukraine is impossible unless you study what happened in 1999 with Serbia. There is a Hegelian thread that runs directly from NATO’s ostensible “humanitarian intervention” to the Russian “special military operation,” linking Belgrade to Belgorod – and everything in-between.

When the first NATO jets dropped their bombs on the capital of then-Yugoslavia, on March 24, 1999, it was supposed to be the crowning achievement of a project described at the time as “benevolent global hegemony.” More commonly known today as the “rules-based international order,” it would be unipolar; the US would make all the rules and the rest of the globe would fall into two camps: allies and future targets.

The US, with NATO as its enforcement arm, had already managed to sideline the UN during the first half of the decade. UN peacekeepers were simply shoved aside during a US-backed Croatian onslaught against Serbs, followed by the NATO bombing of Serbs in Bosnia and a peace agreement negotiated in the shadow of US bombers at an airbase near Dayton, Ohio.

By February 1998, Secretary of State Madeleine Albright was describing the US as “the indispensable nation,” willing and able to use force “to sacrifice for freedom, democracy and the American way of life.” Little wonder, then, that Albright was one of the main drivers of the 1999 NATO assault on Yugoslavia, with champions and critics alike dubbing it “Madeleine’s War.”

The official narrative declares that the US and its allies were concerned about the “human rights” of ethnic Albanians in Kosovo, a province of Serbia and part of what was then the Federal Republic of Yugoslavia. Serbia was battling an armed insurgency by militants calling themselves the “Kosovo Liberation Army” (KLA), and the US threatened Belgrade with bombing unless it stood down.

Yugoslavia agreed, and an OSCE “verification mission” was sent to monitor the situation. The KLA used the truce to regroup and rearm, however. Then, in January 1999, KLA militants clashed with police in the village of Racak. OSCE mission chief William Walker, a US official, quickly declared it a “massacre” of innocent civilians. Helena Ranta, the Finnish head forensic pathologist who examined the bodies, later disagreed – but by then it was too late.

Racak was then used to set up an ultimatum. Albright summoned the delegations of Yugoslavia and the KLA to the French chateau of Rambouillet, where she presented Belgrade with an ultimatum: let NATO troops occupy Kosovo as peacekeepers and agree to have Albanians hold an independence referendum within three years – or get bombed. Furthermore, Annex B gave NATO free passage through the rest of Yugoslavia.

Serbians saw it as an ultimatum on par with what Austria-Hungary demanded in June 1914. This was no accident. The US “intentionally set the bar too high for the Serbs to comply” since they “needed a little bombing to see reason,” one unnamed official later reportedly said. Just like in 1914, Belgrade said no. Just like Vienna in 1914, NATO attacked.

The initial objective of the bombing was to impose the Rambouillet terms. Convinced of its total superiority, based on the first Gulf War experience and the fact that Yugoslavia had been under sanctions for almost a decade, NATO expected the proverbial “short, victorious war” that would last two weeks or so. It would drag on for 78 days instead.

By day three, Yugoslav air defenses had shot down a F-117 Nighthawk stealth fighter, using a 1960s-era S-125 (SA-3) missile. Another F-117 was heavily damaged later, but managed to return to base; that incident remains classified. David Goldfein, who later served as chief of staff of the US Air Force, also saw his F-16 shot down over Serbia on May 2.

B-52 strategic bombers were used to carpet-bomb the border post of Kosare, which sat on the key route from Albania into Kosovo. Surviving Yugoslav soldiers say the strike ended up hitting the KLA instead. Kosare never fell.

The US also sent AH-64 Apache attack helicopters to Albania, but they never saw battle. At least two were lost to what was described as training accidents.

After pummeling the barracks and bases of the Yugoslav Army, NATO turned its sights to roads, bridges, power stations, trains, hospitals, homes, markets and even refugee convoys. Columns of ethnic Albanians – the population NATO was officially trying to protect – were struck on multiple occasions. NATO said the pilots had mistaken them for Yugoslav troops, even as the KLA fed them targeting information from the ground.

On April 23, NATO also targeted the Serbian public television (RTS) studios in Belgrade, killing 16 employees. It failed to stop the Yugoslav media signal from getting out, though. On May 7, bombs struck the Chinese embassy in Belgrade. The CIA admitted the strike was their doing, but publicly apologized and said they had been aiming for a different building nearby. China has neither forgotten, nor forgiven.

As to how effective the attacks on the Yugoslav Army were, the Pentagon eventually estimated it had destroyed 120 tanks, 220 armored personnel carriers and 450 artillery pieces. By the second week of June, however, as the Yugoslav Army pulled out of the province under the terms of the armistice, Western reporters witnessed convoys “untouched by NATO’s air assault.” As few as 13 tanks were actually destroyed. It later turned out that the rest were decoys, some made out of WWII-era weapons originally provided by the US.

By July 2000, the Air Force Magazine declared success should not be measured in the number of destroyed tanks, but the “combined effects from the military, political, economic, and diplomatic actions,” calling the campaign “NATO’s exercise in coercive diplomacy.”

Russian Prime Minister Yevgeny Primakov was flying to the US when the NATO bombing began, and famously turned his plane around. His predecessor Viktor Chernomyrdin, meanwhile, ended up being instrumental in helping Talbot persuade Yugoslav President Slobodan Milosevic to sign an armistice proposed by the Americans, as the only way to end the conflict. Chernomyrdin insisted, however, that he never “deceived” Milosevic or “capitulated” to the US, as General Leonid Ivashov – a senior Russian Defense Ministry official – later claimed in an interview with a Serbian outlet.

Ivashov was one of the organizers of the “dash” by Russian paratroopers to Pristina airport, a gambit that almost secured Moscow a role in the postwar peacekeeping mission, but fizzled due to the lack of political will.

On paper, the terms Yugoslavia eventually accepted in Kumanovo on June 9 were a climb-down from Rambouillet. There was no mention of an independence referendum, no free access by NATO, and some Serbian army and police were supposed to return within months. The peacekeeping mission was promised to be UN-run and Security Council Resolution 1244 guaranteed the territorial integrity of both Serbia and Yugoslavia. In practice, NATO violated every single one of these provisions, turning the province over to the KLA right away and eventually recognizing its independence in 2008.

In 2010, when the International Court of Justice ruled on Serbia’s objection, it engaged in what one dissenting judge called “a kind of judicial sleight-of-hand,” redefining the provisional government established under UNSCR 1244 as simply a group of citizens, not subject to international law.

NATO’s actions violated the UN Charter (Article 2, Article 53, and Article 103), but also the bloc’s own rules (Article 1, Article 7), the Helsinki Final Act of 1975, and the 1980 Vienna Convention on the Law of Treaties. The US and its allies knew this, too – they set up an “independent commission” led by the prosecutor of their Yugoslavia war crimes tribunal to whitewash it as “illegal but legitimate.”

US President Bill Clinton and British PM Tony Blair cited a newly created doctrine of “responsibility to protect” (R2P) as their justification, accusing Belgrade of “ethnic cleansing” and even “genocide” of Albanians. During the bombing, NATO officials speculated that over 100,000 Albanians had been killed. When investigators found fewer than 3,000 bodies, however, the official narrative settled on an arbitrary estimate of 10,000.

Germany even claimed the existence of a secret Serbian plan to deport a million Albanians, calling it “Operation Horseshoe,” yet no evidence of its existence was ever presented. In his 2000 memoir, retired German General Heinz Loquai suggested that it was the product of Berlin embellishing speculation coming from Bulgarian intelligence.

While the bombing failed to overthrow the government in Belgrade, Milosevic was eventually ousted in what would become known as a “color revolution,” in October 2000. Yugoslavia was then gradually erased with Western backing, finally vanishing in 2006 with the secession of Montenegro. To this day, the US embassy in Serbia is in the habit of publicly dictating what kind of government in Belgrade it wishes to see.

The real objectives of the NATO war were revealed in a book by John Norris, an aide to Talbott, called ‘Collision Course: NATO, Russia, and Kosovo.’ Published in 2005, with Talbott’s glowing introduction, the book calls Kosovo itself “a scrap of strategically insignificant territory” and makes the following claim:

“It was Yugoslavia’s resistance to the broader trends of political and economic reform – not the plight of Kosovo Albanians – that best explains NATO’s war.”

Norris tries to blame it all on Milosevic, who was extradited to The Hague in 2001 and died under what his sympathizers viewed as mysterious circumstances in 2006. What his book shows, however, is Washington pulling all the strings – with an eye to maintaining control of Russia, then ruled by the erratic pro-American Boris Yeltsin.

Therein lies NATO’s spectacular failure in 1999. The “cruel” NATO bombing symbolically demolished the “worship” of the West in Russia, famous Soviet dissident Alexander Solzhenitsyn told Der Spiegel in 2007. “It’s fair to say that all layers of Russian society were deeply and indelibly shocked by those bombings,” Solzhenitsyn said. For example, even such a cynically commercial project as the girl group t.A.T.u. recorded a protest song called ‘Yugoslavia‘.

When NATO followed this up by expanding to Eastern Europe and former Soviet republics – starting in 1999 – things only got worse. The current conflict over Ukraine is the endpoint of that choice. But there is another factor. On August 9, 1999 – two months after the armistice that ended the war on Yugoslavia – Yeltsin appointed Vladimir Putin the new acting prime minister of Russia. On December 31, the ailing president would offer the Russian people an apology – and his resignation. The rest, as they say, is history.