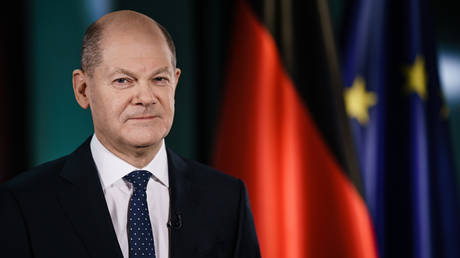 Nearly half of Germans are dissatisfied with Chancellor Olaf Scholz’s actions, a recent poll shows. According to the survey, the German head of government’s popularity is at its lowest point since he was sworn in in December 2021.

Research by the German pollster Insa commissioned by the newspaper Bild am Sonntag shows that about 49% of the respondents are not satisfied with the way in which Scholz handles the top position. According to Bild am Sonntag, this is the lowest level of approval the incumbent chancellor has had since taking office on December 8 last year.

38% of the Germans surveyed said they were satisfied with Scholz’s performance. As for the coalition government currently at the helm in Germany, it has failed to live up to the expectations of 55% of respondents, while the remaining 35% agree.

A more recent survey conducted by pollster Civey for media outlet Der Spiegel between April 17 and April 19 showed that only 25% of Germans view Scholz as a strong leader. 42% of respondents said they thought the chancellor lacked the qualities of a strong leader, while another 23% tended to have the same assessment.

Der Spiegel noted, however, that Scholz was still relatively popular among supporters of his Social Democratic Party (SPD), with 65% of people in that group approving the chancellor’s actions.

This poll is based on the opinion of 5,065 Germans.

The outlet put the apparent decline in Scholz’s popularity down to the chancellor’s refusal to supply heavy weapons to Ukraine. The article concluded that the German leader seemed too hesitant, both to his political opponents and to large sections of society in general.

During his speech on Tuesday, Scholz insisted that Germany could no longer supply Ukraine with weapons from its military stockpiles, for fear of depleting the Bundeswehr’s own reserves at the expense of the country’s defense capabilities. Instead, the chancellor promised to facilitate direct contacts between Kiev and German arms manufacturers and to “provide the necessary funds for the purchase.†

Initially, Berlin refrained from sending military equipment to Ukraine after being attacked by Russia on February 24. However, later as the conflict progressed, Germany changed course and agreed to send several thousand anti-tank and anti-aircraft missiles to Kiev. However, the level of military support that Berlin has provided to the country has remained relatively modest, especially when compared to countries like the US and UK. Senior Ukrainian officials, including the country’s president, Volodymyr Zelensky, and his ambassador to Germany, Andrei Melnyk, have repeatedly criticized Scholz’s government for what they have described as insufficient support.

According to Independent Commodity Intelligence Services (ICIS), Europe’s industrial powerhouse received about 32% of its gas supplies from Russia in December 2021. Officials and business association leaders alike have repeatedly warned that an embargo on Russian gas would harm the German economy. However, Ukraine and some other Eastern European countries are urging Berlin to immediately stop buying Russian hydrocarbons, accusing Germany of effectively funding the Kremlin.

Ukraine expressed frustration with Germany last week when Ukrainian authorities snubbed German President Frank-Walter Steinmeier, who had planned to visit Kiev on April 13, along with several other heads of state. The German politician revealed that the Ukrainian government had indicated that he “was not wanted in Kiev.Meanwhile, the heads of state of Poland, Estonia, Latvia and Lithuania were received by President Volodymyr Zelensky as scheduled.

Ukrainian officials were highly critical of Steinmeier’s alleged close ties to Russia, as the politician was involved in the Nord Stream 2 gas pipeline, among other things.

Chancellor Scholz, for his part, described Kiev’s move as “irritating,“say that”it would have been goodfor Ukraine to welcome Steinmeier.