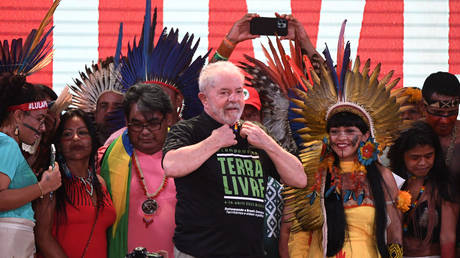 Brazil’s federal police say they have identified the remains of British reporter Dom Phillips, who claimed to have solved a missing persons case involving the journalist and another local man after a search that began nearly two weeks ago.

The remains of two men were discovered earlier this week near the town of Atalaia do Norte on the Brazil-Peru border, police said on Friday. While Phillips, 57, was positively identified, the other body found has yet to be identified, although it is thought to belong to Brazilian indigenous expert Bruno Pereira, who went missing earlier this month while traveling with the journalist.

According to an indigenous organization working with Pereira, the Univaja association, both he and Phillips have disappeared“after receiving threats” of poachers and illegal fishermen in the remote region. The two had embarked on a reporting journey before going missing, while Phillips, a longtime Guardian employee, was working on a book about the Amazon and its conservation.

The Brazilian federal police have identified the perpetrators as Amarildo da Costa de Oliveira, a 41-year-old fisherman who allegedly confessed to the murders, as well as the man’s brother, Oseney. Amarildo said he used a firearm and took officers to a remote area in the rainforest to locate the remains of the two men, although his brother has denied any connection to the crime.

“We found the bodies three kilometers away [1.8 miles] In the woods,” Federal investigator Eduardo Alexandre Fontes told reporters earlier this week before the remains were identified. He added that the search group traveled nearly two hours across the river and another half hour on foot to reach the cemetery.

Phillips and Pereira were last seen on a boat navigating a river bound for the indigenous area of ​​the Javari Valley near the borders with Colombia and Peru, where armed poachers had clashed with government forces in the past.