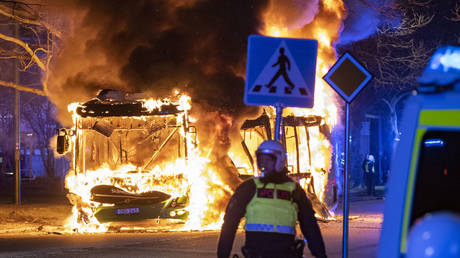 Chants of ‘Allahu Akbar’, police cars set on fire and officers injured – this is what the run-up to Easter looked like this week in several cities across Sweden, after authorities gave a far-right anti-immigration group the go-ahead to organize rallies, including plans to burn the Quran.

Riots broke out in the town of Linkoping on Thursday, where youth gangs clashed with police, injuring three officers. At least two people were arrested.

The violence was fueled by the decision by the Swedish authorities to authorize a series of anti-Islam demonstrations. Organized by Rasmus Paludan – a right-wing Danish politician who spent time in prison on charges of racism – the events in several places in Sweden aimed to monitor the burning of Islam’s holy book, the Quran. .

Tensions came to a head on Friday when the Danish fire station descended on the city of Orebro.

While Paludan and his supporters were initially allowed to hold their rally, eventually it had to “dissolved” in the light of the “serious security situation.Gangs of rioters protesting the far-right group pelted the police with stones and set fire to four police vehicles.

The situation was so tense that the police had to fire warning shots at one point, a police spokesperson confirmed to Swedish media.

While the local police initially spoke of four injured officers and a bystander, they later updated that number to say that “about ten colleagueshad suffered injuries.
According to authorities, some of the police officers taken to the hospital had been hit on the head, while others were believed to have broken arms. Police described the events in Orebro as a “violent riots.†

Similar scenes took place in the Swedish capital of Stockholm, as well as in Malmö and Norrköping.

On Saturday there was unrest in the town of Landskrona, with dozens of young people setting fire to cars, tires and garbage cans. According to local police, none of the police officers deployed in the city were injured. Officials noted that tensions gradually eased.

According to the Expressen newspaper, Paludan managed to burn at least one copy of the Quran on Friday in the Rinkeby district of Stockholm. A video was also posted on Twitter, which appears to show him in the act.

The Swedish authorities explained their decision to allow Paludan to hold the controversial rallies across the country, citing freedom of expression.

Paludan’s anti-Islam performances and subsequent riots came before Easter and during the month of Ramadan.