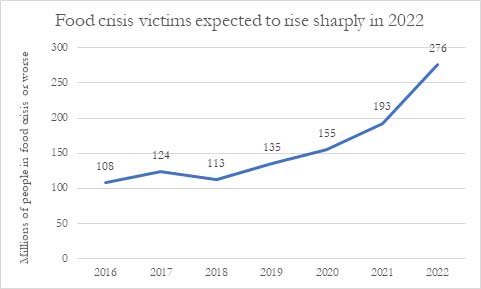 SYDNEY and KUALA LUMPUR, May 31 (IPS) – The economic sanctions imposed by the US and its allies against Russia for the illegal invasion of Ukraine have not met their stated goals. Instead, they exacerbate economic stagnation and inflation worldwide. Worse, they exacerbate hunger, especially in Africa.

Sanctions cut both ways
Unless approved by the United Nations Security Council (UNSC), sanctions are not permitted under international law. With Russia’s veto in the UN Security Council, the unilateral sanctions imposed by the US and its allies after the invasion of Ukraine have soared.

In the period 1950-2016, ‘comprehensive’ trade sanctions reduced bilateral trade between sanctioned countries and their victims by an average of 77%. The US has imposed more sanctions regimes, and for longer periods, than any other country.

The unilateral imposition of sanctions has gained momentum over the past 15 years. In the period 1990-2005, the US imposed about a third of the sanctions regimes around the world, and so did the European Union (EU) significantly.

The US has introduced more sanctions since 2016, imposing an average of more than 1,000 entities or individuals annually between 2016 and 2020 — nearly 80% more than in 2008-2015. The one-term Trump administration increased the U.S. share of all new sanctions to nearly half, from a third previously.

In the period January-May 2022, 75 countries introduced 19,268 restrictive trade measures. Such measures on food and manure (85%) exceed those on raw materials and fuels (15%). Unsurprisingly, the world is now faced with fewer supplies and higher prices for fuel and food.

Monetary authorities have raised interest rates to curb inflation, but such efforts are now failing to address the main drivers of higher prices. Worse, they are likely to deepen and prolong the stagnation, increasing the likelihood of “stagflation.”

Sanctions were supposed to bring Russia to its knees. But less than three months after the ruble plummeted, the exchange rate is back at pre-war levels, rising from the “ruble rubble” promised by Western economic warmongers. With enough public support, the Russian regime is in no rush to impose sanctions.

All of this has pushed up world prices for grain and oilseeds, raising the cost of food for everyone. On May 19, the agricultural price index was 42% higher than in January 2021, while wheat prices were 91% higher and maize 55% higher.

The World Bank’s April 2022 Commodity Markets Outlook notes that the war has changed world production, trade and consumption. It expects prices to be at historic highs, at least until 2024, raising food insecurity and inflation.

Western bans on Russian oil have caused energy prices to rise sharply. Both Russia and its ally Belarus – also hit by economic sanctions – are major suppliers of agricultural fertilizers – including 38% of potash fertilizers, 17% of compound fertilizers and 15% of nitrogen fertilizers.

Now that food agriculture is less sustainable, for example due to global warming, sanctions further reduce production and incomes, in addition to raising food prices in the short and longer term.

Sanctions hurt the poor the most
Even if they are supposedly targeted, sanctions are blunt instruments, often having unintended consequences, sometimes contrary to their intended purpose. Therefore, sanctions generally fail to achieve their stated goals.

Many poor and food insecure countries are major wheat importers from Russia and Ukraine. The duo supplied 90% of the imports from Somalia, 80% from the Democratic Republic of Congo and about 40% from both Yemen and Ethiopia.

It appears that Russia’s financial blockade has hurt its smaller and more vulnerable Central Asian neighbors more: 4.5 million from Uzbekistan, 2.4 million from Tajikistan and nearly a million from Kyrgyzstan work in Russia. Difficulties in sending money transfers cause a lot of hardship for their families back home.

Although this was not their intention, the US measures in the period 1982-2011 have hurt the poor more. The poverty level in sanctioned countries was 3.8 percentage points higher than in comparable countries.

Sanctions are also much more damaging to children and other disadvantaged groups. Research in 69 countries found that sanctions reduced the baby’s weight and increased the chance of dying before the age of three. Unsurprisingly, economic sanctions violate the UN Convention on the Rights of the Child.

A study of 98 less developed and newly industrialized countries found that life expectancy in affected countries was reduced by about 3.5 months for every additional year under UN sanctions. For example, an average five-year episode of UN Security Council-approved sanctions reduced life expectancy by 1.2-1.4 years.

World hunger is rising
As polemical accusations between Russia and the US-led coalition over rising food and fuel prices mount, the world is rushing towards an “apocalyptic” human “catastrophe”. Higher prices, prolonged deficits and recessions can cause political unrest, or worse.

The UN Secretary-General has emphasized: “We must ensure a steady flow of food and energy through open markets by removing all unnecessary export restrictions, directing surpluses and reserves to those in need and staying ahead of food prices. to curb market volatility”.

Despite falling poverty rates at the World Bank, the number of undernourished has risen from 643 million in 2013 to 768 million in 2020. Up to 811 million people are chronically hungry, while those dealing with ‘acute food insecurity’ have more than doubled from 135 since 2019. million to 276 million.

With the onset of the Covid-19 pandemic, OXFAM warned, the “hunger virus” could be even more deadly. The pandemic has since pushed tens of millions of people into food insecurity.

In 2021, before the war in Ukraine, 193 million people in 53 countries were deemed to be experiencing a ‘food crisis or worse’. The war and sanctions are expected to increase the number of victims by 83 million – or 43% – by the end of 2022.

Economic sanctions are the modern equivalent of ancient sieges, which seek to starve the population into submission. The devastating effects of sieges on access to food, health care and other basic services are well known.

Sieges are illegal under international humanitarian law. The UN Security Council has unanimously passed resolutions demanding the immediate lifting of the sieges, such as resolution 2139 of 2014 against the civilian population in Syria.

But permanent councilors who veto them are responsible for invading Ukraine and imposing sanctions unilaterally. Therefore, the UN Security Council will not usually act against the impact of sanctions on billions of innocent civilians. No one seems to protect them from sanctions, the mass starvation weapons of today.