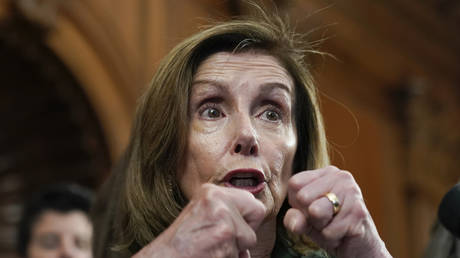 China is likely to respond with a show of force as the US continues its provocations. The war will not start today, but the crisis will deepen in the long run.

At around 10pm Taipei time (2pm GMT), US House Speaker Nancy Pelosi is expected to land in Taipei. Although she has omitted the visit to the island from her public itinerary, US and Taiwan insider officials have since told the media that the trip is going ahead. Pelosi is expected to spend the night in Taipei and meet President Tsai Ing-wen the following day, before moving on to South Korea and Japan. Meanwhile, China has made it clear that the move constitutes a huge provocation, undermines the foundation of US-China relations and would lead to Beijing retaliating. The US has since tried to turn the tables and portray China as the aggressor for threatening a response.

In the past few hours, China has begun issuing its response. Airspace in Fujian province bordering Taiwan has been closed. New sanctions have been filed against Taipei in retaliation for complicity in the visit, which amounted to a sweeping ban on food exports by 100 companies, Chinese planes have crossed the border “Median Line” of the Taiwan Strait, and more military responses appear to be in the pipeline. However, one must be careful to note that, for all the fear and uncertainty, this will not be a declaration of war or an invasion. China’s intent is to show power and deterrence, to take its stance on the Taiwan issue, not to cause catastrophe.

However, the danger does not lie in potentially destructive short-term reactions. Pelosi’s visit — the fact that it’s happening, not the substance of what she’s doing in Taipei — will pave the way for further US-China confrontation in the long run. It’s not worth going to war over Nancy Pelosi, and China with so much to lose isn’t that stupid. Still, the seriousness of this visit cannot be underestimated – it is not a one-off event, but contributes to a long pattern of provocations from the US, actively seeking to undermine the legitimacy of the One China policy.

This includes: Biden’s recent comments that the US would “to defend” Taiwan, Lithuania’s US encouragement to a “Taiwan Representative Office”, deleting references to the One China Policy from the Ministry of Foreign Affairs website, and of course Taipei’s own bid to invite as many Western politicians to the island as possible, including allegedly paying them spurious amounts, in an effort to oppose China and undermine possible reunification. All the while, Beijing has watched and issued increasingly stern warnings. This is how Pelosi’s adventurism could be”the drop that broke the camel’s back.” You could argue that her visit is a personal decision, but as the third most powerful person in the US and second in line for the presidency, Beijing considers her a representative of Washington’s will, and such a provocation cannot don’t leave it unanswered.

China believes, based on all of the above, that the US is gradually increasing its public commitment to the “One China Policy” with underhanded decisions that effectively move the goalposts (a tactic described as “cutting salami”) and weaken the legitimacy of China’s position. Therefore, Beijing is obligated to push back vigorously, meaning that the more such provocations the US does, the more tensions and risks mount as the middle ground collapses. Worse, Taiwan’s leaders are actively indulging in this behavior because they think they can get away with it and Beijing’s threats are just a bluff. They see this effort as creating a slow change towards a formally independent Taiwan, with China only being able to rage against it from the sidelines.

This means that unless Beijing’s response – whatever it is – makes Washington reconsider its behavior, which, when you look at the bigger picture of things, seems extremely unlikely, the issue is slowly moving towards war. The doctrine of US foreign policy, as we see with Ukraine, is based on the premise that in order to maximize US benefits, America must not compromise at all costs and must always use all its means to fulfill its unilateral preferences. accomplish. We see this with Ukraine and NATO enlargement, North Korea and denuclearization, Iran and the JCPOA, and of course China and Taiwan.

Ultra-hawks mock deals with adversaries as weakness and reconciliation, which in this context means, and especially since China is labeled the biggest threat to the US, there’s no realistic chance of a compromise, which is exactly why individuals like Nancy Pelosi act this way, to ensure that there will be none. So this visit will be a turning point in many ways, but in the long run, as opposed to the short run. China is likely to respond with a show of force, one well-planned for a “path of no returnBut what will disappoint Beijing is how little this is likely to change in the bigger picture.