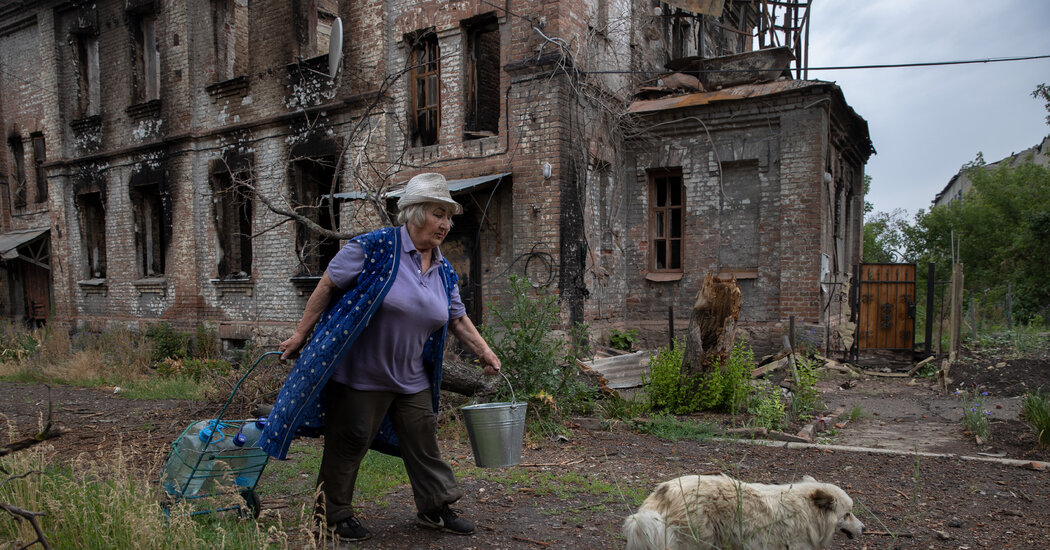 LYSYCHANSK, Ukraine – All the bridges connecting the two Ukrainian cities of Lysychansk and Sievierodonetsk have been destroyed and street-by-street fighting rages on, leaving thousands of civilians largely trapped in one of the war’s deadliest battles to date.

Russia has targeted the area since the large-scale invasion began in February, but now that it has narrowed its offensive to the resource-rich eastern Donbas region, Russian commanders have steadily diverted more troops into the small patch of land in and around Sievierodonetsk.

There are still an estimated 10,000 people in the city of Sievierodonetsk, and hundreds are believed to be in bunkers beneath a chemical plant that is under almost constant bombing. The Ukrainian government said this week that a large-scale evacuation of the city is now impossible. Russia has promised to create a humanitarian corridor, but previous claims have not materialized and Russian forces have focused their fire on locations where civilians have gathered to flee.

Fierce fighting continued in Lysychansk and Sievierodonetsk on Thursday. A Russian airstrike struck the center of Lysychansk on Thursday morning, killing at least one person, local authorities said.

For most of the day, Russian and Ukrainian artillery fired from the opposite banks of the Siversky Donets River, which separates the two cities. A group of Ukrainian soldiers, taking a breather from the fighting in the basement of a Soviet-style apartment, asked New York Times reporters when Western missile artillery systems would arrive and said they would need many.

On the front lines, as Russian artillery storms the city of Lysychansk, “an hour feels like a whole day,” said one soldier.

In Sievierodonetsk, the people of the destroyed city are now largely alone. Those who have made it recently describe harrowing scenes.

Serhiy Haidai, the head of Luhansk’s military government, said the shelling was now so intense that “people can no longer stand in the shelters — their psychological state is on the brink.”

Russia has no control over the city, he said, and battles are fought from house to house. At the same time, Russian forces continue to ravage the villages around the city, Haidai said.

“The destruction of the residential sector is catastrophic,” he said. People in the city have reported running out of food and clean water — describing scenes similar to those seen in Mariupol and many other towns along the Eastern Front over the past four months.

Some 60,000 civilians still live in Ukrainian-controlled Lysychansk. But the constant Russian bombardment of the area as Russia tries to encircle Ukrainian forces there has made any large-scale evacuation an extremely difficult proposition.

Much of the estimated 50,000 to 60,000 artillery shots fired by Russia every day is concentrated in this last part of the Ukrainian-controlled Luhansk province.

The kind of convoy needed for a large-scale evacuation will most likely require coordination between Russia and Ukraine overseen by international mediators. There is no public suggestion that such a plan is being discussed. In Lysychansk, volunteers evacuate dozens of civilians every day in a hodgepodge of vehicles.

Ukraine’s top military commander, Valerii Zaluzhnyi, said in a statement that Russia had focused its efforts on this battle. In addition to non-stop artillery fire, Moscow directs air strikes and uses multiple missile launch systems to obliterate everything in its path. Russian troops are trying to advance from the north, east and south along nine separate fronts.

Despite Russia’s superior arsenal, the Ukrainians managed to stop the Moscow forces from completing the encirclement of the area. General Zaluzhnyi said they would keep fighting.

Sievierodonetsk, he said, is an important point in the defense system of the Luhansk region. “The city can be seen as nothing less than that,” he said.