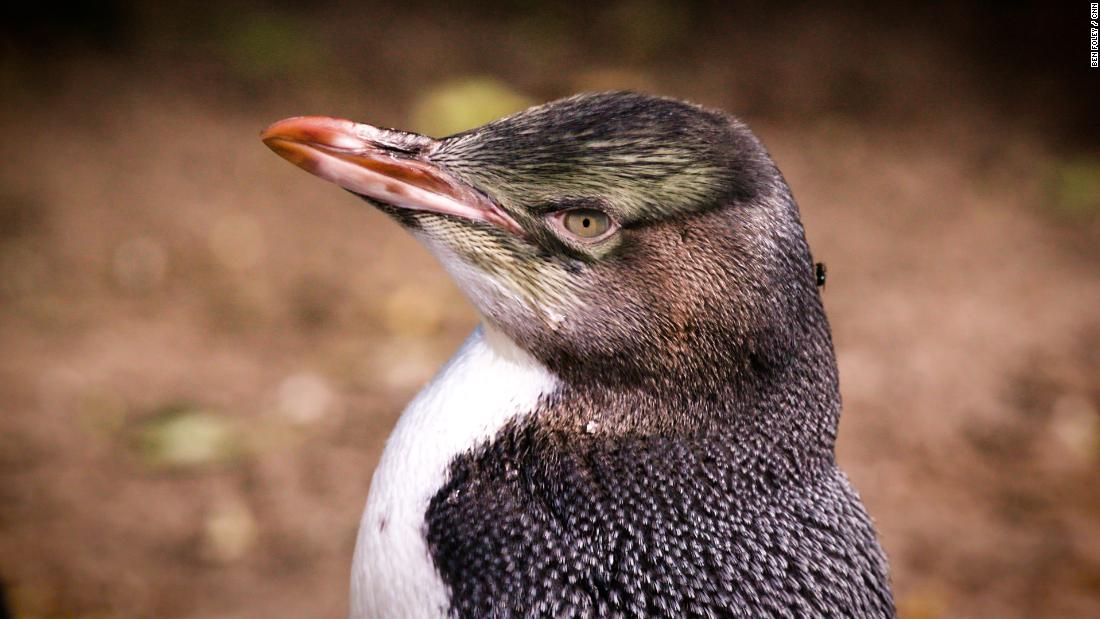 (CNN) — Brutal, tough and mean: that’s how yellow-eyed penguins are lovingly described by the people who spend their days with them.

“(They) aren’t as cute and cuddly as they look,” said Jason van Zanten, conservation manager at Penguin Place in New Zealand’s Otago Peninsula. “They can hit you really hard.”

The yellow-eyed penguin, locally called hoiho, which means “noise screamer” in Māori, is the largest of the penguin species that live and breed in mainland New Zealand.

But the population has declined dramatically over the past 30 years due to increasing threats from predators, climate change and disease. “In the past ten years we have lost about three quarters of the population,” says Van Zanten.

Now conservationists are gathering to save the species. Penguin Place — where Van Zanten works — provides a place for hiho to rest and recuperate, while nearby The Wildlife Hospital, Dunedin, treats people with serious injuries and illness.

These penguin sanctuaries race against time to save the rapidly declining population — and give the “noise screamers” a fighting chance to survive.

The yellow-eyed penguin – also known as hoiho, meaning “noise screamer” in Māori – is the largest of the penguin species living in mainland New Zealand. But hoiho numbers have fallen sharply in recent decades. Now conservationists race to save these rare birds from extinction.

Although Penguin Place is a haven for all sick and starving birds, including other penguin species, hoiho make up the majority of patients who pass through it, says van Zanten.

The center was established in 1985 when local farmer Howard McGrouther fenced off approximately 150 acres of his land to create a sanctuary for the eight breeding pairs of yellow-eyed penguins that nested on his property.

McGrouther “established the bones of the rehabilitation center” and also began replanting native trees previously felled for agriculture, says van Zanten, who began working at the center as a labourer, mowing lawns and maintenance, and now oversees on the operations. The center was funded entirely by tourism until the Covid-19 pandemic, when it had to close to the public and received government funding through the conservation ministry, van Zanten says.

Hunger is a big problem for hoiho, with about 80% of penguins arriving in the center underweight, van Zanten says. Commercial fishing — which has resulted in some penguins ending up as bycatch — has reduced the availability of the small fish and squid the penguins feed on, and fluctuating sea temperatures due to climate change have altered the distribution of their prey.

“They like it when it’s a bit cooler, and with our rising temperatures they get a lot more stressed and overheated,” says Van Zanten.

Starvation aside, many hoiho arrive at the Penguin Place with illness and injury – and that’s where The Wildlife Hospital, Dunedin, which specializes in native species, steps in.

On land, hoihos are hunted by mammals, including dogs, stoats and foxes that can seriously injure them or their chicks, while in the water, sharks and barracouta, a predatory fish with razor-sharp teeth, often inflict “horrific injuries,” Lisa says. Argilla, a senior veterinarian and director of The Wildlife Hospital, Dunedin.

Hoiho usually stays at Penguin Place for about two weeks, resting, recuperating and getting fat before returning to the wild.

Hoiho also suffers from several illnesses, including avian malaria and dermatitis, which the hospital can treat with antibiotics. In addition, avian diphtheria has plagued the hoiho population for the past 20 years: it causes lesions, similar to ulcers, in the bird’s mouth and makes it difficult for them to eat, ultimately leading to starvation.

And now there is another new, unknown disease that affects hoiho chicks. Tentatively referred to as “red lung,” the disease causes respiratory problems, according to Kate McInnes, an endangered species veterinarian with the New Zealand Department of Conservation.

The cases started appearing five years ago, but “there has been a significant increase in the past two (years),” McInnes says. She adds that the disease doesn’t seem contagious, but researchers are still trying to figure out the cause.

When chicks arrive at the hospital already sick with the mysterious illness, Argilla says they cannot be saved. But Argilla and her team have found a solution: hand-rearing chicks in the hospital.

“If we get them at a certain age, when they’re very young, we can prevent them from getting this disease,” she says. The chicks are removed from their nests shortly after hatching and reunited with their parents in the wild after 10 to 14 days.

For sick and injured birds, The Wildlife Hospital sends them to Penguin Place after treatment, where they recover before being released back into the wild, Argilla says. “It’s exciting for us to know that what we do really makes a difference.”

A chance to bounce back?

Back at Penguin Place, the hoiho are kept in small enclosures with rocks, wooden blocks and shelters. They are given an intensive feeding program to fatten them up before being released, and they are fed fish twice a day.

Most birds stay in the center for about two weeks before being released into the reserve, where they can mate and nest, says Van Zanten. “The more they are in the wild, the better for them.”

As the world’s only solitary penguin species, hoiho are antisocial and don’t like to nest in plain sight of their neighbors — sometimes even leaving their eggs behind if they see another penguin, van Zanten says. To make them feel more secure, Penguin Place has small A-frame wooden cottages dotted around the reserve, hidden under the shade of trees and shrubs near the beach.

Penguin Place offers visitors guided tours of the reserve through camouflaged, hand-dug tunnels, allowing tourists to spot the hoiho in their natural habitat without disturbing them.

While there is always a risk in removing animals from the wild, McInnes says a hands-on approach to conservation is necessary: ​​”If we don’t intervene, a large number of those chicks will die.” She expects an increase in breeding pairs returning to the beach over the next two years as a result of the interventions.

And van Zanten is optimistic that the species can bounce back. Penguin Place has an extremely high success rate: More than 95% of the 200 to 300 birds that come to the center each year are released back into the wild, he says. Last year, the center set a personal best, with 99% of the birds released, giving hope for this critically endangered bird.

“The work we do is critical to these (penguins) and their survival here on the mainland,” says Van Zanten.