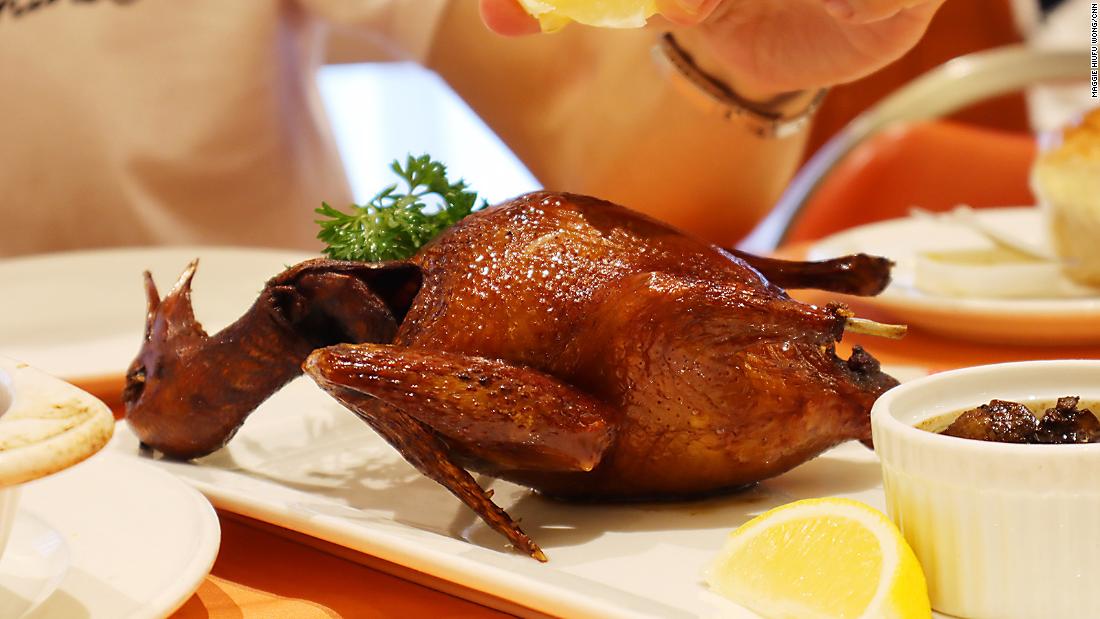 Hong Kong (CNN) — A huge blue and red neon sign hangs above a narrow alley off the busy Nathan Road in the Yau Ma Tei area of ​​Hong Kong.

The five bold Chinese characters read “Tai Ping Koon Restaurant” – the famous name of the very first Chinese “western” restaurant in China. Today it is one of the longest operating family restaurants in Hong Kong.

Opened in 1860 in Guangzhou, Tai Ping Koon had two branches in the Chinese city before moving to Hong Kong during the Second Sino-Japanese War in 1938. (The family moved due to conflict and political instability and now has four remaining locations in Hong Kong.)

Most diners come for one dish in particular – the TPK Style Roasted Pigeon. It’s brought to the table by a server wearing a bow tie, along with an unlikely accessory: plastic gloves. Because there is no better way to devour the crispy and juicy poultry than with your hands.

But as popular as the dish is, few of the pigeon-eaters know that this palm-sized piece of poultry is said to have changed the course of modern Chinese history.

Andrew Chui is the fifth generation owner of the Tai Ping Koon restaurant chain, one of the oldest operating family restaurants in Hong Kong.

Andrew Chui, the fifth-generation owner of the Tai Ping Koon Restaurant chain, spent seven years visiting libraries around the world to learn about his family’s background.

“The history of Tai Ping Koon is not only important because it has been here for 160 years, it is also part of the history of the country and has influenced Cantonese food culture,” says Chui, who has authored two books about his family business.

The story of Tai Ping Koon dates back to the years after the First Opium War (1839-1842), when treaty ports were opened in Canton – now Guangzhou – for Westerners to trade. Foreign companies, including restaurants, were allowed to operate in these ports.

Always assisted by a foreign chef and catering to foreign sailors, these eateries hired local chefs to help in the kitchens.

“My great-great-great-grandfather Chui Lo-ko was hired as a chef in the restaurant of an American trading company, making him one of the very first Chinese chefs to be trained in Western cooking,” Chui says.

Chui spent seven years visiting libraries around the world to find stories and information about his family business.

But the job didn’t last. After a disagreement with the trading company’s agent, Chui Lo-ko resigned.

Destitute, he had to figure out how to earn a living from the only skill he had: cooking western food.

“Which was a problem,” Chui adds.

Chui Lo Ko came up with the idea to cook steak with soy sauce and sell his food on the street.

By presenting an unknown ingredient with a familiar taste, his fusion dish became an instant hit among local Chinese.

When he had saved up enough money, in 1860 Chui Lo Ko opened the first Tai Ping Koon restaurant (meaning “house of peace and stability”), named after its location on Tai Ping Sa Street in the canton.

This would mark the beginning of what is now called Western soy sauce cooking, a cooking style that has influenced more than a century of Cantonese food culture.

With its unique offerings, Tai Ping Koon quickly became a fashionable meeting place among the wealthy and powerful in China, with guests like Sun Yat-sen – the revolutionary leader and national hero of modern China – as well as the influential Soong sisters reportedly dining. in the original Guangzhou restaurants.

It was said that Soong’s eldest sister, Soong Ai-ling, and her husband Kung Hsiang-hsi, one of the richest men in China and leader of the Kuomintang party, were so fond of Tai Ping Koon’s roasted pigeon that they held a special banquet for fellow party leader Chiang Kai-shek and his then-wife Chen Jieru.

But what Chiang and Chen didn’t know was that there was reportedly a hidden agenda to the party.

Strategically next to Chiang was Soong’s own younger sister, the charismatic Soong Mei-ling.

Squabs were not a common ingredient in China back then. So when roasted pigeon, a relatively new European-inspired dish, was served, Soong Mei-ling was given the task of teaching the diners how to taste the dish by hand.

Legend has it that Chiang fell in love with the youngest Soong sister after the banquet. In 1927 he divorced his three wives and asked Soong for her hand in marriage.

Chiang’s ex-wife Chen later recounted the episode in her memoir, claiming that the pigeon dinner was actually a “man flu” plan.

The Yau Ma Tei branch is one of the four remaining Tai Ping Koon restaurants.

The pigeon dinner was one of many interesting moments Chui discovered during his Tai Ping Koon research.

“These stories were passed down from generation to generation without much detail. I heard that Chiang and Soong came back to Tai Ping Koon in the 1930s for the roast pigeon, because they were connected by the dish. But was it true?

“It was like police work. I have to be careful not to make up stories. I want to prove that the story is really about Tai Ping Koon,” Chui says.

Chui visited all public and university libraries in Hong Kong. And when those didn’t yield enough results, he flew to various American libraries, from Stanford to Chicago, to search their vast Asian-focused collections.

“I read every book. I mean every book. You either have to have a lot of passion or be crazy to do that for seven years. I’m a crazy guy with passion,” Chui says.

Finally, he found piles of news stories and anecdotes in books to connect the dots.

There were also a few unsolved mysteries, such as the alleged marriage of former Vietnamese Prime Minister Ho Chi Minh and Tang Tuyet Minh, a Chinese midwife. It was was to take place at one of the Tai Ping Koon restaurants in Guangzhou in 1926. However, the Vietnamese leader was never officially married.

“But if I had to pick a historical moment (related to the restaurant), I want to travel back in time when Zhou En-lai, the first Prime Minister of the People’s Republic of China, was to marry Deng Ying-chao in Tai Ping. Koon Chui says.

Now closed, the centrally located Wing Hon Road Tai Ping Koon in Guangzhou has been frequented by many politicians in the past.

In 1925, the local media reported extensively about the news that Zhou and Deng had organized their wedding at Tai Ping Koon. Since it was considered a luxury restaurant, it would have been inappropriate to hold a ceremony for the Communist Party leader there.

The rumor was so widespread that Zhou and Deng reportedly tried several times in later years to make it clear that they had not held a ceremony at Tai Ping Koon. It was a simple dinner hosted by a well-meaning friend, knowing that the destitute couple had no real celebration for their relationship.

“Yet nobody knows the truth today. There were people who believed both sides of the story,” Chui says, pulling out a couple of two-inch-thick folders filled with news clippings.

Growing up on a family restaurant so entwined with history, Chui says it’s a huge honor, but also very stressful, especially as Covid-19 has put a strain on business for the past two years.

“When people are in business, they will continue if they are making money. If they can’t make money, they can shut it down. Closing isn’t an option for me,” Chui says.

Tai Ping Koon continues to respect its traditions in many ways, offering free lodging and meals for their staff right next to their restaurants in prime locations, where rents are notoriously high. Free accommodation was a standard employee benefit before the 1970s, when transportation was inconvenient. Tai Ping Koon is considered the only restaurant in Hong Kong that still keeps the tradition alive.

The recipes have also been preserved.

“The pigeon is still made in the original way: fresh pigeon seasoned in homemade soy sauce and fried to order. The only difference was that we had our own pigeon loft in the backyard a long time ago,” says Chui.

When he was young, he says his parents would teach him how to make the famous roast pigeon in Tai Ping Koon’s kitchen.

Today, he regularly brings his 13-year-old son into the kitchen to learn how to make the giant soufflé — another iconic dish — by hand, in the hopes that one day he would carry on the family legacy.

“I hope it will instill in him a sense of pride. I’ll pass on the generational stories of Tai Ping Koon to my kids — just the fun ones so far to keep them interested. Maybe I’ll tell them about the hardships later.” Chui laughs.