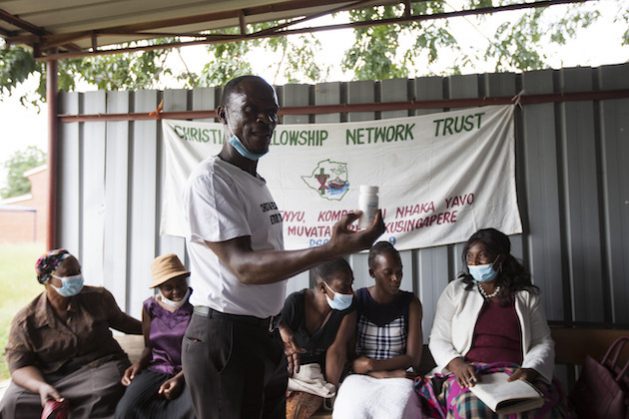 Jimu, now 51, said the couple’s two sons died prematurely. Both were underweight and frail, although the couple had previously been blessed with a daughter, Faith Jimu, who is now a 29-year-old mother of three.

Jimu was born in Zimbabwe’s central Mashonaland province, in the Mazowe Citrus Estate, with his rural home in Mukumbura Province in the village of Chigawo.

Two years after his wife, Tendai Goba, died after a very long illness, which he said was eroding her weight, Jimu was tested for HIV and found positive.

“My wife Tendai died in 2001 and succumbed to AIDS, although we had no evidence at the time that she was suffering from it. She had Kaposi’s sarcoma, a cancer associated with AIDS,” Jimu told IPS.

His diagnosis did not dampen his zest for life – although he faced much discouragement from family members, friends and colleagues.

“When I started losing weight, people said I was bewitched by my brother, who they claimed had goblins that sucked my blood,” Jimu said.

He said the slander started when his wife and two sons were still alive.

“Some opponents were even blunt in their statements in the early days when my wife was ill, when our sons were still alive. People said my sons were very thin because they had AIDS. We would hear this and never say anything back. But of course our sons died prematurely because they were all underweight (but) before we knew they had HIV,” Jimu said.

But thank goodness, said Jimu, the couple’s daughter, who was born before the couple contracted HIV/AIDS and has lived without the disease and is now a parent.

Still, even when his first wife kicked the bucket, Jimu never gave up on life.

Now living in Chitungwiza, a town 15 miles southeast of Zimbabwe’s capital Harare, in 2003, shortly after testing positive for HIV, Jimu immediately began antiretroviral treatment, which has kept him going for nearly two decades. .

In fact, 51-year-old Jimu has been living with HIV/AIDS for nearly two decades and has stuck to his antiretroviral treatment without fail.

Thanks to his belief in ARV treatment, Jimu now looks like any other healthy person.

‘Look, I look good. No one can see that I am HIV positive. No one can even say I’m on ARV meds unless I tell them myself,” Jimu boasted.

Despite being HIV positive, he continues to live his life.

In 2007, Jimu became the founder, leader and pastor of the Christian Fellowship Network Trust, a support group that he believes has become pivotal in supporting people living with HIV and AIDS in Chitungwiza.

He hasn’t stopped embracing life, and thanks to the help of HIV/AIDS support groups, Jimu said he got married again a year after testing positive.

Francisca Thomson, his second wife the same age as him, also lives with HIV.

“Francisca is my queen, a very beautiful girl, I can tell you that, and we are so happy together,” Jimu boasted.

Jimu said he, like any other average person, has become a beacon of hope for many living with HIV.

He said he was open about his HVI/AIDS status at a time when the public detested people like him and when HIV/AIDS stigma was rife.

“I’m one of those people who appeared on national television in an HIV/AIDS ad clip where I said I hadn’t crossed the red light…I’m a preacher…I’m HIV-positive, whose ads sponsored by Population Services International said Jimu

Now a noted HIV/AIDS fighter in Zimbabwe, Jimu can’t help but express his gratitude for the Chitungwiza General Hospital here, which he said made him what he is today: an epic HIV/AIDS educator.

Living with HIV has not forced Jimu into a cocoon.

Instead, he said the condition has only made him a staunch defender of many others.

“I am now very active in providing routine counseling services and spiritual guidance to many who have recently tested positive for HIV and seeing me with the positive attitude I have. Many are quickly adapting to their HIV-positive status and moving on with their lives,” Jimu said.

Still, it was not easy for Jimu to get to where he is today.

He said he came face to face with stigma over the years and said many people around him were disgusted by the fact that he just saw him sick.

Jimu said landlords were quick to evict him when they learned of his status.

“As a tenant of the many houses I have lived in, I would soon get a message to leave because people were afraid to live with me because they thought I would wake up dead in their homes one day or infect them with hiv. I heard people gossiping about my illness, some said I was now a moving skeleton, some urged me to visit prophets for healing, some said I should go back to the village and die there,” Jimu said.

However, over the years, things have gotten better with Jimu saying his family members are starting to embrace him.

Yet in the past, he had to contend with all the mocking and discrimination from both friends and family.

“Being hated and discriminated against were the things I’ve encountered in church, work and many other places. At many gatherings we attended with my late wife, we had to sit in the back because people were embarrassed that we were in the front seats, obviously ashamed of what we looked like because of the signs of illness on us,” Jimu recalls.

But that is now a thing of the past.

Now that more and more people with HIV can live with the disease more easily, Jimu has a message for them.

“I urge people who are HIV positive to take their medication at prescribed times without failing, even if they think they are now healthy and fit,” he said.

And he also brings an almost similar message to those about to get married.

“I urge couples to get tested for HIV before having sex. If someone is tested positive, they can be assisted by health experts to live a healthy life without infecting each other with the disease,” said Jimu.