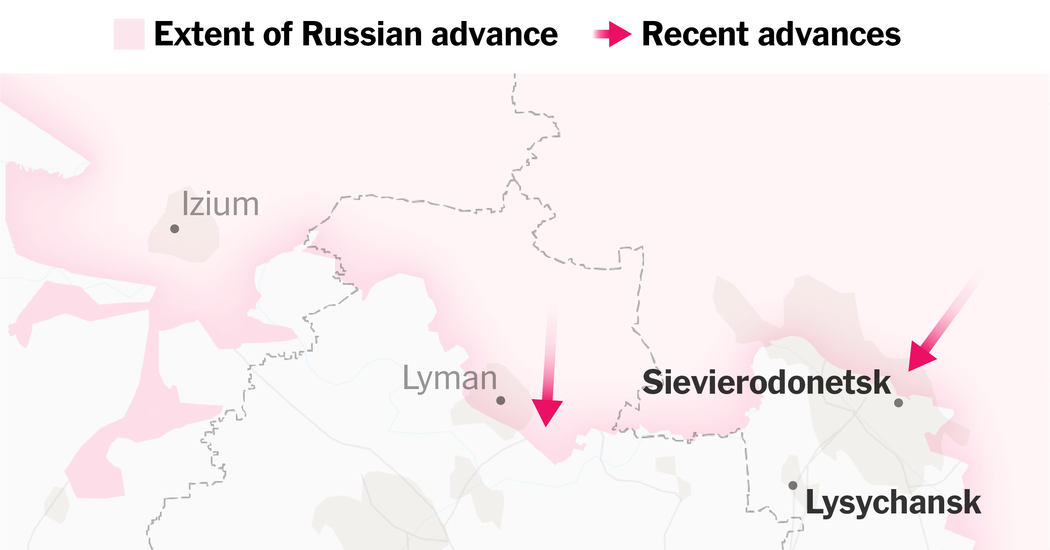 Before invading Ukraine on February 24, Russian forces already controlled about 30 percent of the eastern Ukrainian region known as Donbas. Russia had taken the area — with help from local separatist forces — as part of a sporadic, often low-grade war with Ukraine that began in 2014.

Today, Russia controls nearly 75 percent of Donbas. Some of the most recent Russian gains have been made around Sievierodonetsk.

Together, those two stats — 30 percent and 75 percent — provide a useful summary of the war.

Yes, the war has turned out much worse for Russia than almost anyone expected: Rather than capture Kiev, the capital of Ukraine, in just days, the Russian army had to withdraw and limit its targets to Donbas, a long-disputed border region. But Russia is making progress there nonetheless. It can still achieve the more limited goal of dominating Donbas. And Vladimir Putin is betting he will be more patient than Ukraine’s western allies.

Today’s Times has several notable pieces about Ukraine. Helene Cooper looks at the military mistakes that Russia is repeating, and Carlotta Gall profiles the Ukrainians who choose to stay in their homes in Donbas. Three photographers – Lynsey Addario, Finbarr O’Reilly and Ivor Prickett – have published frontline photos and stories.

In the Opinion section, President Biden has published an essay explaining that his administration will continue to send weapons to Ukraine, but not troops. In the essay, he announces that the US will send longer-range missiles to Ukraine than before.

In addition to those pieces, we use today’s newsletter to give you an overview of the war.

The big question in the coming weeks – according to our colleague Julian Barnes, who covers US intelligence – will be whether Russia can encircle Ukrainian forces in Donbas. If Russia can do that, Ukrainian troops could be cut off from the rest of the country and suffer heavy casualties. Russia could then be in a position to take control of almost all of Donbas.

“Intelligence officials have said repeatedly, both publicly and privately, that this next phase will be very important in setting the tone for the war in the months ahead,” Julian said. “It will determine whether we stay in something approaching a stalemate or if one side gains the upper hand.”

In the first weeks of the war, Russia tried to act quickly and conquer large parts of the territory. The military proved incapable of doing so, rebuffed by Ukrainian forces, with the help of weapons from the US, the EU and other allies. In the current phase of the war, Russia has emphasized a strategy from other recent wars, in Syria and Chechnya: to use missiles and other heavy artillery to bombard and eventually take over towns and villages.

As Anton Troyanovski, head of The Times’ Moscow bureau, says: “The war has clearly lasted much longer than anyone expected, including the Russians. And the Russians have adapted after those initial failures and have gone back to the traditional method of waging wars.”

The bombing appears to cause significant Ukrainian casualties. On a typical recent day, between 50 and 100 Ukrainian troops were killed, President Volodymyr Zelensky recently estimated. Russia has also succeeded in capturing a number of economically important areas, including ports and grain fields.

Putin has adopted a strategy that Russia has used throughout much of its history, combining its vast resources with a high tolerance for casualties to slowly make war profits. In this war, Putin believes Ukraine’s western allies are getting tired of fighting long before he feels much pressure to do so. “He’s betting the West is getting tired and distracted,” Anton said.

Yet Putin faces many of the same problems that undermined the first invasion of Russia, as Helene Cooper’s story explains. The military has proven to be an inefficient, top-down organization in which field commanders often have to wait for high-level orders. Much of the Russian equipment is outdated and many of its troops are not properly trained. They also did not expect to be part of a full-scale war, and the deaths of thousands of their fellow soldiers further weakened morale.

“The Russians are trying to subdue a huge country with a well-organized army fighting on its own turf,” Helene said. “That’s quite a task for an army where you have soldiers on the ground who have no idea why they are even in Ukraine.”

Ultimately, many analysts believe that Russia’s military problems will make it very difficult for Putin to control large parts of Ukraine for months or years. Still, Donbas is where he is most likely to find some success.

“The overall military balance in this war is still in Ukraine’s favour, given the availability of manpower and access to extensive Western military support,” Michael Kofman, the director of Russia studies at CNA, a research group, said. wrote recently† “That will show more over time. But the local balance in the Donbas at this stage is a different story.”

The most likely medium-term scenario is that Russia will control much of the Donbas and Putin will patiently and brutally try to expand Russian interests. He – as well as Ukraine and its allies – would then have to decide whether a ceasefire is possible.

“I will not pressure the Ukrainian government – ​​privately or publicly – to make territorial concessions,” Biden wrote in his essay in the Times.

The most watched team in baseball

The Savannah Bananas, a summer league collegiate baseball team in Georgia, have sold out every home game since 2016. They also have more TikTok followers than the Yankees and Mets combined. The dancing umpires may have something to do with that.

Banana games are a bit like a circus, writes Margaret Fuhrer in The Times. Players sometimes wear stilts. The first base coach is a charismatic hip-hop dancer who has never played baseball. A cast of 120 entertainers — including a pep band and a “dad bod cheerleading squad” — add to the spectacle.

“We want people who used to say, ‘I don’t like baseball,’ say, ‘I need to see the Bananas,’” said Jesse Cole, the team’s owner, who also hosts the field in a yellow tuxedo. .