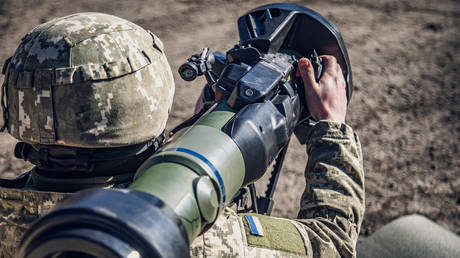 “We will donate a small number of armored vehicles equipped with launchers for those anti-aircraft missiles,” Wallace told lawmakers, citing the Starstreak missiles Prime Minister Boris Johnson had already promised to Kiev earlier this month as part of a £100 million ($130 million) weapons package.

British officials had already confirmed that Ukrainian troops were being trained on Salisbury Plain, while British tabloid The Sun reported last week that the Ukrainians were likely to receive the Stormer vehicles.

The Stormer is a tracked vehicle first produced by Alvis Vickers in the 1970s and now produced by BAE Systems. It can carry a variety of rocket launchers, mortars or cannons. The Stormers on their way to Ukraine will fire Starstreak missiles – anti-aircraft projectiles broadly similar to the US-made Stinger or the Russian IGLA. It is unclear how many missiles or launchers were sent to Ukraine.

In addition to the multimillion-pound weapons package announced by Johnson, the UK has sent thousands of anti-tank missiles to Ukraine. The US pledged an additional $713 million in military aid to Kiev on Monday, bringing the amount of military aid Washington began in February since the start of Russia’s operation in Ukraine in February to nearly $4 billion.

Meanwhile, Russia has repeatedly claimed to have destroyed stockpiles of Western weapons in Ukraine. Most recently, Russian military spokesman Major General Igor Konashenkov stated on Saturday that “high-precision long-range air-launched missiles” hit a logistics terminal near Odessa, where “a large consignment of foreign weapons received from the United States and European countries was stored.” Ukraine, in turn, claimed that the attack was in fact targeting civilians.