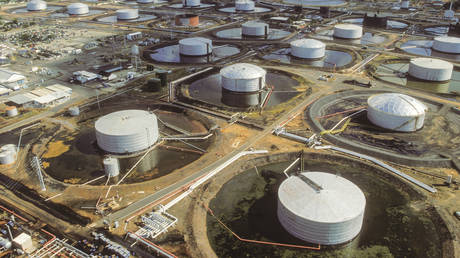 Senior US officials have visited Venezuela to ensure the well-being of several US citizens in custody, as well as to restore ties with the government in Caracas, as Washington enforces a series of tough sanctions against the Venezuelan economy.

A delegation led by US Ambassador to Venezuela James Story and Roger Carstens, the presidential envoy to hostage-taking, traveled to Caracas on Monday “for discussions about the welfare and safety of US citizens in Venezuela,” State Department officials confirmed this to CBS and Associated Press.

While officials did not specify whether the talks targeted specific individuals, several US citizens are currently being held in the country, including a group of oil company executives jailed more than four years ago.

Venezuelan President Nicolas Maduro confirmed the trip in a national speech and said US officials met with Jorge Rodriguez, the president of the National Assembly, to “give continuity to the bilateral agenda between the United States government and the government of Venezuela.”

The visit follows an earlier trip in March — the first official White House delegation in more than 20 years — that resulted in the release of two Americans. At the time, Maduro also agreed to resume talks with his political opposition, led by Juan Guaido, who is recognized by Washington as the “interim president” of Venezuela.

Ambassador Story met Guaido for two hours shortly after arriving in Caracas, according to the AP, which noted that the couple “discussed efforts to initiate negotiations” with Maduro in Mexico.

It is unclear whether US sanctions were discussed in the latest talks with the Venezuelan government, although President Joe Biden recently said he would be willing to “calibrate” the penalties depend on the outcome of the negotiations between Maduro and his opponents.

The renewed diplomacy with the Latin American nation coincided with the Russian attack on Ukraine in late February, which sparked a wave of sanctions from Washington and its allies, some aimed at imposing full embargoes on Russian energy. While officials have said little about whether the US plans to turn to Venezuelan oil as an alternative, the Biden administration has quietly lifted some fines on Caracas, allowing two European companies to resume oil deliveries earlier this month.