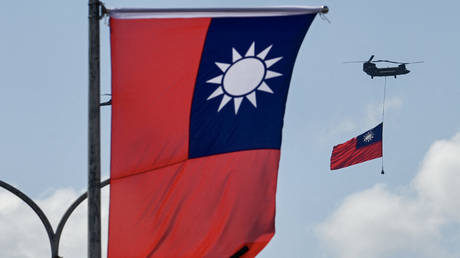 US President Joe Biden said on Monday that Washington is willing to use military force to defend Taiwan if necessary. During a joint press conference with Japanese Prime Minister Fumio Kishida in Tokyo, he said the US sees the idea of ​​China “enter” with his troops as unacceptable.

When asked whether the US would become directly involved in a conflict between China and Taiwan, including through the use of military force, Biden said that “Yes,” adding “It’s a commitment we’ve made.” The US leader has previously said that Washington is… ‘A Chinese’ policy, recognizing that there is only one China led by Beijing.

Biden, however, insisted that China does not “jurisdiction to go in and use force to take over Taiwan.” The idea that the island nation “It can be taken by force is just not appropriate. It will disrupt the entire region.” added the US president.

The American leader makes his first official tour of Asia. It is also the first time this century that a visit to China is not included in such a trip. According to the news channel Nikkei Asia, deterring China was one of the main topics in the talks between Biden and Kishida. The US president will be joined during the talks by Secretary of State Antony Blinken, Secretary of Commerce Gina Raimondo, US Trade Representative Katherine Tai, US Ambassador to Japan Rahm Emanuel and National Security Adviser Jake Sullivan.

Biden will also meet with leaders from Japan, India and Australia on Tuesday at the so-called Quadrilateral Security Dialogue (Quad) summit. The US president is also expected to launch the Indo-Pacific Economic Framework later on Monday. The trade pact aims to deepen America’s cooperation with countries in the region on supply chains, digital trade, clean energy and the fight against corruption.

The pact could eventually include up to 12 countries other than the US, including Australia, Brunei, India, Indonesia, Japan, Korea, Malaysia, New Zealand, the Philippines, Singapore, Thailand and Vietnam. Taiwan will not be part of it, Sullivan confirmed on Sunday.

“We want to deepen our economic partnership with Taiwan, including on high-tech issues, including semiconductor supply,” he said. “But we are aiming for that bilaterally in the first instance.”

Taiwan has recently accused China of repeatedly violating its defense zone. In early May, the island nation reported that China’s nuclear bombers had entered the zone. Taiwan has had de facto self-government since 1949, when remnants of the nationalist government fled the mainland after their defeat in the civil war, but never formally declared independence from China. Beijing regards the Taiwanese authorities as separatists and emphasizes that the island is an inalienable part of China.

Beijing has regularly flexed its military muscles near the island, buzzing it with large aircraft units and sending warships. Taiwan is also a source of constant friction between China and the US. The United States has no formal diplomatic ties with Taipei, but does enjoy close military cooperation with the island. Washington has also long announced its commitment to protecting Taiwan’s “independence.”